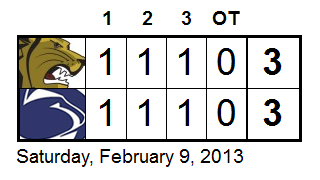 It was a win that wasn't, thanks to a brutally missed call when Taylor Gross was tripped attempting to carry out of the PSU zone with a 3-2 lead in the last minute and Lindenwood goalie Nicole Hensley on the bench - a play that directly led to Allyson Arcibal's tying goal with 42 seconds left in regulation. Officially, Penn State is now 7-20-2 (1-13-2 CHA), while Lindenwood is 4-23-3 (4-9-3 CHA), but the Nittany Lions earned two points, period. No other way to say it.

Know how bad the no-call was? It featured prominently in the generally sunny and controversy-free official recap. Here that is, followed by the live blog.

The final Penn State women's hockey game at Greenberg Ice Pavilion was a taut affair that ended in bizarre fashion as Lindenwood tied Penn State, 3-3, on Saturday afternoon. LU's Allysson Arcibal scored an extra-attacker goal with 42 seconds remaining to force overtime after a couple of tough calls went against PSU.

Jill Holdcroft (Pennsylvania Furnace, Pa.) scored a go-ahead goal with five minutes left in the third period on a power play for a 3-2 lead. Jordin Pardoski (Rochester Hills, Mich.) ripped a shot from the blue line that ricocheted off the post as Holdcroft slipped the puck past LU netminder Nicole Hensley (25 saves).

With less than a minute, Lindenwood earned a faceoff in the Penn State zone. Before the teams lined up for the faceoff, Penn State attempted to call a timeout, which was denied by the officials. On the ensuing faceoff, Taylor Gross (Colorado Springs, Colo.) won the skirmish with Alyssa West and was ready to send the puck out of the defensive zone. West tripped up the junior captain as Lindenwood took control of the puck along the boards and a loose puck was knocked home by Arcibal to knot the game.

Shannon Yoxheimer (Jackson, Mich.) opened the account 9:08 into the game, an unassisted tally where she sniped a shot past Hensley glove side. The goal was Yoxheimer's 13th of the season and ended an eight-game goal draught dating back to Jan. 4. In that eight game span, Yoxheimer still managed to get on the score sheet four times through assists. Lindenwood answered with a power-play goal 3:20 to tie the game and the two squads skated into the break, 1-1.

Lindenwood spent most of the second period on the power play, garnering four power-play chances and two 5-on-3 chances. Penn State killed them all off and allowed 12 shots. Seconds after the final penalty kill, Lindenwood's Katie Erickson ripped a shot that was tipped in by Lyndsay Kirkham to tie the game with 1:41 left in the period.

Penn State travels to Rochester, N.Y. to face RIT next week in a two-game series. The Friday-Saturday set will have 7 p.m. opening faceoffs.