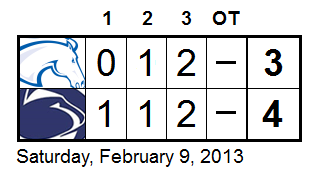 With the score tied with less than five minutes remaining in the game, freshman defenseman Mark Yanis (Grosse Pointe Woods, Mich.) blasted a slap shot to the back of the net to send the Penn State men's hockey team to a 4-3 victory against Alabama Huntsville at Greenberg Ice Pavilion Saturday night.

The Nittany Lions, who improved to 12-13-0 in front of a sellout crowd, secured their third straight win for the first time since a four-game winning streak Oct. 20-Nov. 3. Penn State, which also swept a weekend series for the first time this season, closed out Greenberg Ice Pavilion at 4-4-0 against NCAA competition.

Freshmen forwards Casey Bailey (Anchorage, Alaska/1g, 1a) and David Glen (Fort Saskatchewan, Alta.), who completed a five-point weekend with a goal and an assist, gave the Nittany Lions a 2-0 lead midway through the second period before the Chargers tied the game with two markers, the latter coming 54 seconds into the third.

With 11:15 left in the first period, Bailey gave the Nittany Lions a 1-0 lead. Holstrom sent a pass to defenseman Peter Sweetland (Newtown, Pa.) at the blue line, where he fed Bailey in the high slot. The Anchorage, Alaska, native then ripped a shot that pinged off the left post before hitting the back of the net.

Glen doubled the Penn State advantage at 10:45 of the second period. While on the power play, Bailey sent a pass to Glen at the bottom of the right circle, where he one-timed a blast past Griggs. Gardiner also collected an assist on the play.

At 17:34 of the frame, Lysaght made it a 2-1 game. Steven Koshey started the play in his defensive zone and fed Lysaght, who sent an outlet pass to Michael Webley through the neutral zone. Webley took the puck behind the cage before passing back to Lysaght in the right circle, where he wristed a shot for the goal.

Justin Cseter tied the game at 2-2 with a power-play goal 54 seconds into the third stanza. While on a 5-on-3 advantage, Cseter corralled the loose puck in front of the net and slipped it past Skoff.

With 12:37 left in the game, Brooks skated Penn State to a 3-2 advantage. After Glen's shot went wide, Brooks won the race to the loose puck and had his shot from below the goal line sneak past Griggs.

The Chargers tied the game once more at 12:20 of the frame when Anderson White connected with Geoffrion at the bottom of the right circle for the marker.

At 15:33, Yanis provded the heroics with his fourth tally of the season. Junior Justin Kirchhevel (Brookings, S.D.) moved the puck to Holstrom, who fed Yanis above the right circle. The blue liner's first attempt was blocked before firing a shot to the back of the net for the 4-3 final.

The Nittany Lions, who have two weekends left in the their inaugural NCAA season, will return to action Feb. 15-16 for a two-game exhibition series against the ACHA's Oklahoma Sooners.