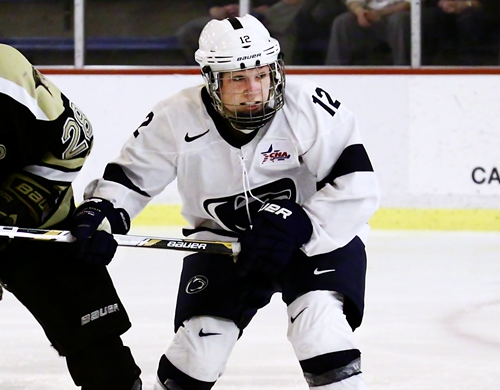 3. A Sneak Peek at the Pegula Ice Arena
(The Penn Stater)

PIA tours have become frequent enough that it's no longer a guaranteed all-time top tenner (traffic wise) when I drop in a photo of the progress, whether from myself or someone else. Regardless, here's a solid recent look from Tina Hay, the editor of PSU's alumni magazine. Pics beyond the two in the post were dropped in a Facebook gallery as well.


"I work hard, which might make up for not having some other essential skills," Holdcroft said. "I love to forecheck and get into the corners and make the other team work even harder to defend against."

While I referenced it directly and indirectly a few times over the weekend, I wanted to get one last shoutout to Kate Christoffersen on the record, following the forward's Senior Day on Saturday. She's a pre-donation player who finished on the NCAA team, a great thing in and of itself. But for those who don't know by now, this happened at the end of the 2010-2011 season:


Kate Christoffersen and her parents couldn’t help but cry at their kitchen counter.

The three shed tears on March 6, after Kate arrived home to Trumbull, Conn., for spring break as David and Mary talked to their daughter about the possibility of ending her 14-year hockey career.

The Lady Icers sophomore defender had sustained her fourth career concussion on Feb. 11. After the season, Christoffersen decided to hang up her skates and stop playing the game she has played since age 6 because of what she calls her “most severe concussion.”

From there to here - one of my favorite stories ever.

When combining the men and women, and among DI schools, Penn State's six recruits from Minnesota trail only North Dakota's eight among out-of-state schools. They're not leftovers either. On the men's side, Anchorage transfer Eric Scheid is a proven DI player, as he was fourth on the Seawolves in scoring as a freshman last year. For the women, Amy Petersen and Laura Bowman are most of the offense for two-time defending state high school champ Minnetonka and Hannah Ehresmann is part of a 50-50 goalie rotation for the Skippers. Christi Vetter (Lakeville North) and Sarah Nielsen (Edina) are also two of the best players on two of the best teams in the state. National and district camp invites are sprinkled throughout as well. Basically, well done, coaches. One of those Minnesotans - Scheid - had a chance to play in the USHL's first outdoor game on Saturday, the afternoon half of a doubleheader at Omaha's TD Ameritrade Park. However, the archrival Omaha Lancers jumped all over Scheid's Lincoln Stars early and coasted to the win in front of an announced 13,650. The Blaine High School product was a +1 with a pair of shots.

Congrats to George Saad's brother on scoring his first NHL goal for the Blackhawks. I'm going to be honest with you guys though, I'm a little tired of living vicariously through Penn State siblings and other, much more tenuous, connections to the show. Here's hoping for our very own NHLer - not one from the OHL's Saginaw Spirit or Wisconsin (Max Gardiner's brother Jake) - in the next five years or so. 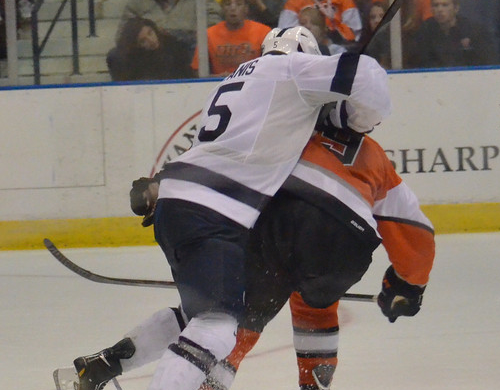 Five collegians to watch for the 2013 NHL Draft
(Hockey's Future)

...so, towards that end, here's someone who thinks Mark Yanis is a "collegian to watch" for this year's NHL Entry Draft. As a second-year eligible guy, the deck's kind of stacked against him, because there's a whole new birth year available for people to get excited about, and hey, everyone already passed on him once (seven times, actually).

That said, it does happen. One example is a player PSU saw this year, and in fact scored a game-winning goal against the Nittany Lions: Union defenseman Shayne Gostisbehere, who was passed over in 2011 before being drafted 78th overall by the Flyers in 2012. Yanis, who was given a B rating (roughly translating to mid-round consideration) on the NHL Central Scouting watch list in 2011 before dropping out of the ratings closer to the 2012 draft, is an intriguing prospect. He does fit the mold as a possible second-year pick, since he's someone who has taken a developmental step that many expected to see last year, specifically with respect to his offensive capabilities. He's been as advertised otherwise, of course (see photo above). The bottom line for me is that he is good enough for an NHL team to own his rights, but the logistics are against him. We'll see - here's hoping.

A PSU guy much more likely to be drafted is Eamon McAdam, an incoming freshman next year, who chipped in a long-awaited third blog entry for TPS last week. In it, he discusses his SportsCenter-worthy save at the USHL Top Prospects Game, as well as his other experiences at the showcase.

Penn State ice hockey team might not return to Hershey for a while
(pennlive.com)

Obvious statement is obvious. PSU will want to play at Pegula Ice Arena as much as possible, and if they do venture to neutral Pennsylvania sites, it will likely be to cultivate their following in the major cities of Philadelphia and Pittsburgh.
Posted by Kyle Rossi at 12:01 AM