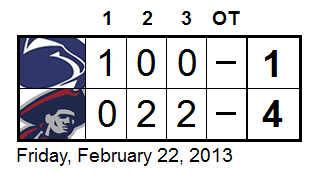 Despite a fortunate Emily Laurenzi goal that bounced in - seemingly in slow motion - off of a Robert Morris skate to give the Nittany Lions a 1-0 lead late in the first period, PSU (7-23-2, 1-16-2 CHA) was unable to take down the defending CHA champion Colonials (12-14-3, 8-10-1 CHA) at the Island Sports Center Friday night. The game placed Penn State in a couple of new slots in the RMU media guide, as Colonials goalie Kristen DiCiocco reset the program wins record (32) and Robert Morris rifled 63 shots at Nicole Paniccia to set a new team mark in that category.

Here's the RMU recap (as well as video of the goals), followed by the live blog.

With tonight's win, senior goaltender Kristen DiCiocco (Niagara Falls, Ontario / Stoney Creek Jr. Sabres) earned her 32nd career victory to set a new record for wins by a single goaltender in Robert Morris program history. DiCiocco stopped 12 of the 13 shots she faced from the Nittany Lions to tally a .929 save percentage in the recording breaking victory.

To begin the Colonials last regular series of the year, Robert Morris hit the ice with great intensity. RMU outshot Penn State 16-5 throughout the first 20 minutes of play while the Colonial penalty kill stifled the Nittany Lion's only power play chance of the first frame. After an unusual failed clear attempt by RMU and an unlucky bounce, Penn State scored the opening goal of the contest with 1:14 remaining in the first period. Freshman forward Emily Laurenzi was credited with the score with Hannah Hoenshell and Paige Jahnke registering assists.

Halfway through the second period, the Colonials were able to execute multiple scoring opportunities as RMU scored its first goal of the game at 10:22 of the period. Senior assistant captain Jamie Joslin(Richmond Hill, Ontario / Aurora Panthers) stole the puck at the blue line, skated it into the offensive zone and immediately fire a shot on net. The shot deflected off the chest of PSU goaltender Nicole Paniccia as forward Rebecca Vint (Caledon, Ontario / Brampton Jr. Thunder) crashed the net hard and buried the puck past Paniccia. The assist is the 12th of the season for Joslin and the score marks the 15th of Vint's sophomore campaign.

Less than three minutes later, RMU would take a 2-1 lead off a bang-bang play from three Colonial forwards. Sophomore forward Maddie Collias (Roseville, Mich. / Belle Tire) hit linemate Katelyn Scott (Brighton, Mich. / Belle Tire) with a quick pass that allowed her to send the puck across the crease to senior captain Dayna Newsom (Oakville, Ontario / Oakville Ice) for a back door power play goal. The power play goal was scored at 13:12 of the second period. The assists are the sixth and ninth for Scott and Collias while the goal is the third of the season for Newsom. The goal is also second power play goal this year for Newsom, first game-winning goal and the second goal of she has scored against the Nittany Lions.

Throughout the second 20 minutes of action, RMU outshot Penn State 30-5. The 30 shots by the RMU marks a season-high for shots in a period. The Colonials surpassed its previous season-best 26 shots they put on net last weekend in the third period of game two against Lindenwood. Fourteen of RMU's 30 shots came on the three power play opportunities.

Robert Morris added to its lead at 5:33 of the third period when senior assistant captain Cobina Delaney (Stittsville, Ontario / Ottawa Jr. Senators) tallied her fifth goal of the year. Senior forward Kelsey Thomas (Hamilton, Ontario / Hamilton Hawks) passed to junior forward Kristen Richards (Toronto, Ontario / Niagara University) for the initial shot on net. After a scrum to the left of the cage, Delaney found the puck and lifted into the top of the net to put the Colonials up, 3-1. The assist for Thomas allows her to move into a tie for fifth all-time in career points with 75. The goal for Delaney also allows her to move into the top-10 in career goals as she has scored 22 goals in her four-year career at Robert Morris.

The Colonials scored their final goal of the contest with 2:16 remaining in the third frame to earn the 4-1 victory. The fourth RMU goal was scored by Scott for her second point of the game and fourth goal of the season. Junior defenseman Brandi Pollock (Virden, Manitoba / Westman Wildcats)passed off to Joslin at the blue line and Joslin fired a shot on net that Scott tipped in for the score. The assist marks Pollock's fifth of the year as Joslin tallied her 13th assist of the year and second of tonight's game. Joslin's two-point performance on the evening moves her career total for points to 43. The senior is now tied for most career points tallied by a Colonial defenseman. The defender also moves into a tie for third all-time in assists by a defenseman with 30 career assists.

RMU outshot the Nittany Lions 63-14 in the victory. The 63 shots on net sets a new single-game program record for Robert Morris passing the 61 shot-effort against Lindenwood last season. The Colonial penalty kill unit was a perfect four-for-four in the evening contest. The defensive unit now ranks 11th on national scene with an 85.7 kill percentage (102-119).