In their last game before the ACHA National Championships begin on March 15th in St. Louis, the Ice Lions fell to Virginia Tech in the MACHA title game Sunday morning in Abingdon, MD. The setback dropped PSU to 25-5-1 overall and snapped the team's 16-game winning streak. Prior to that, Penn State defeated Temple and Rider in the league tournament on Friday and Saturday to with the North Division half of the bracket and reach the final. 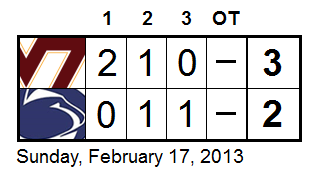 The Hokies started the game coming hard on the forecheck and to the front of the net, and it paid off with a quick 2-0 lead. First, 5:53 into the game, Tyler Daley sniped from the left circle after a scramble in front got Ice Lions goalie Kevin Lowthert down and the puck skipped out the Virginia Tech senior. About four minutes later, defenseman Peter Veltri floated a shot on net that Mitch Clark knocked home.

VT had ideas of going up three, as a long two-man advantage followed shortly after Clark's goal. However, PSU killed it to help siphon the game's momentum for the rest of the period and into the second - which paid off when Franky Reluzco cut the Hokie lead in half. On a three-on-three rush, Reluzco sped in down left wing, dropped the puck for trailing Taylor Vincent, then went to the crease to get it back and score. Tech had an answer, however, with seven minutes left in the frame when Kevin Peak found a loose puck in the slot with Brandon Russo in the box and flipped a backhander in past a pile of bodies.

Penn State took to the offensive for much of the third period as well, and finally got Virginia Tech in some penalty trouble, which led to a second Ice Lions goal. Seconds after a 5-on-3 PSU advantage narrowed to 5-on-4, Mike Broccolo deflected Mac Winchester's point shot past Walker Detweiler. Detweiler - who would be named tournament MVP - held up the rest of the way however, despite a 40-26 PSU shooting advantage for the game.

For the Ice Lions, Chris Lewis and Winchester joined Detweiler on the all-tournament team.

Details from Penn State's first two MACHA playoff games are somewhat sketchy (box scores weren't submitted to the ACHA website for any of the games, and conflicts with PSU NCAA games kept me from watching), but here's what we do know, gathered mostly from the opponents' Twitter accounts (just to explain why their goal scorers always have names and ours don't). 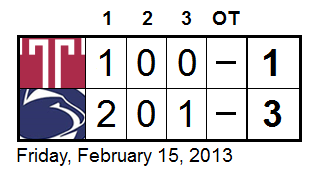 In the first-round clash with Temple, the Owls struck first on a shorthanded breakaway by Greg Malinowski. The Ice Lions regrouped, however, and as they so often do, scored in bursts - this time with two goals in the last 2:55 of the first period to take the lead into the locker room. After 39:55 of scoreless hockey that followed the second PSU goal despite tons of penalties (particularly in the second period), the Ice Lions added insurance with 48 seconds left in the game.

Temple coach Jerry Roberts told the Temple News that his team may have earned a better result:


“In my opinion, Penn State is one of the top teams at our level in the country and partly in tonight’s game, we felt we were the better team,” Roberts said. “Not that we’re necessarily a better team than they are, but to be able to execute properly to 60 minutes the way we felt we could all season, showed we were capable of playing those big teams.” 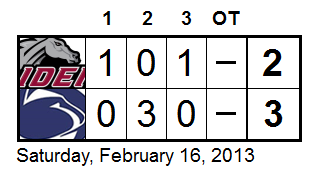 Much like Temple the day before (and Virginia Tech the day after, as it would turn out), Rider was able to get an early advantage on the Ice Lions, thanks to Pete Malamud's tally from Tyler Deitrick at 8:40 of the first period. And much like the day before (but not the day after, unfortunately), PSU answered in numbers, this time with three second-period goals that were enough to survive Chris Daley's third period effort.

As mentioned, PSU earned an autobid to nationals prior to the tournament, and will join Marist, New Hampshire, Grand Valley State, Michigan State, Miami University, Utah State, Arizona State and eight other teams to be determined in battling for the D2 title March 15th through 19th.

Like the men, the women have qualified for their ACHA national tournament and will join California (PA), West Chester and Delaware from the East Region, as well as Wisconsin-Stout, Alaska, North Dakota State and Minnesota-Duluth from the West Region in Ashburn, VA from March 7th through 10th.

Before that however, the Women's Ice Hockey Club, 6-2-1 overall, will play the final game at the Greenberg Ice Pavilion by any Penn State intercollegiate hockey team (the somewhat crazy side to that is the fact that it's their only game at the rink this season, and therefore ever) Friday night at 8:00 p.m. The opponent: Slippery Rock, a team PSU defeated 8-0 back on December 9th in Altoona, thanks to four goals each from Devon Fisk and Mandy Mortach, as well as a shutout split between Katie Vaughan and Sarah Eisenhut.
Posted by Kyle Rossi at 3:38 AM