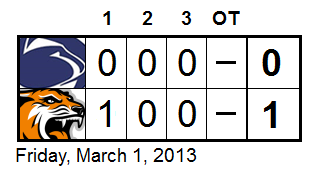 It's a cliche, but 1-0 losses are among the most frustrating because in hockey, there's such a fine line between goal and no goal. A bounce here, an inch there... the what-if game always fails of course, because surely, RIT (15-15-5, 7-8-5 CHA) would like to add a couple hypothetical goals to their total as well. So it might be disingenuous to suggest the Nittany Lions (7-25-2, 1-17-2 CHA) deserved a better fate in game one of their first-round best-of-three CHA playoff series, but still, the possibility was on the table for all 60 minutes of a contest that saw the narrowest shot differential (35-16) of any of the five between PSU and RIT this season.

There certainly were a handful of chances to spoil RIT goaltender Ali Binnington's shutout, with perhaps the best being among the last - a late third-period power play shot by Paige Jahnke that worked through a perfect Birdie Shaw screen but was somehow stopped by the Tigers' sophomore netminder. On the other end, Nicole Paniccia was nearly Binnington's equal with 34 saves and just one fateful goal allowed, by Marissa Maugeri on a beautiful back-door setup from Erin Zach 9:22 into the first period.

Penn State is now down to one remaining chance to extend its season, Saturday afternoon's game two. Win, and the series rubber match is on Sunday. Lose, and a longer-than-desired offseason officially commences.

Here's the RIT recap, followed by the live blog.

Maugeri tallied her ninth goal of the season at the 9:22 mark of the opening period, as she streaked into the Penn State zone and took a perfect feed from Erin Zach (Elmira, Ontario/Cambridge Fury), diving to redirect a shot past Paniccia. Emilee Bulleid (Waterdown, Ontario/Stoney Creek Sabres) also assisted on the goal.

From there, RIT continued to press, but Paniccia kept everything out, stopping 35-of-36 shots in a losing cause. Binnington made 16 saves to record her sixth shutout of the season and improve to 10-9-4. Her best save came with 6:45 left in the final period, as Paige Jahnke fired a shot through a screen on a power-play that Binnington turned aside.

RIT’s defense did a brilliant job keeping Penn State to the outside, as the Nittany Lions failed to generate much in the way of quality throughout. The Tigers out-shot Penn State 35-16 and both teams were 0-for-2 with the man-advantage.

RIT had a few other great chances to go up 2-0, but Paniccia made a handful of big saves. Kourtney Kuncihika had Paniccia beat off a clean face-off win, but her shot went off the right post and back under the pad of the Penn State goaltender.

RIT continued to press in the second period, but could not solve Paniccia, despite the healthy 16-6 edge in shots in the frame and a 29-11 edge over two periods of play.

In the final period, RIT had a handful of great chances, but were unable to get good shots off, or had them blocked. The RIT defense killed off two Penn State power-plays.

RIT Head Scott McDonald was happy with his team’s effort in their first Division I playoff game.

“I thought that was a solid playoff game,” said McDonald, who picked up his 150th win behind the bench for the Tigers. “It was very low scoring, and tight defensively. They had an odd strategy of hanging a player in the neutral zone, but once we adjusted to it, I thought we controlled play very well in their end and did a great job of limiting their offensive chances.”

Today’s game was the fifth meetings between the two schools this season. RIT holds a 4-0-1 edge thus far. On Oct. 25, RIT rolled to a 4-1 win over the Nittany Lions. The next night, despite firing 63 shots on goal, RIT needed a late goal from Hiller to salvage a 2-2 tie. Paniccia made 61 saves in that contest for Penn State. Just two weekends ago, RIT rolled to 3-1 and 4-0 victories over the Nittany Lions at Ritter Arena. On Feb. 15, Ariane Yokoyama (Van Nuys, CA/LA Selects) dished out three assists to reach the 100-career point total for the Tigers. The next night, RIT exploded for three second period goals, and Laura Chamberlain (Norco, CA/LA Selects) stopped 20 shots to record her 12th career shutout.

The Tigers and Nittany Lions will play game two of the CHA First Round Series at 2 p.m. If RIT wins, they advance to face No. 2 seed Syracuse in the CHA Semifinal next weekend at Mercyhurst. If Penn State wins, they will force a decisive game three, which will be played on Sunday at Ritter Arena, beginning at 2 p.m.