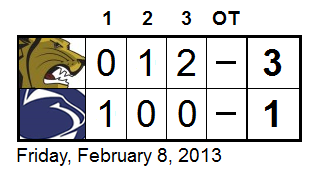 The Nittany Lion women (7-20-1, 1-13-1 CHA) started their final home series of the inaugural NCAA season well enough, as a solid first period Friday afternoon was punctuated by Emily Laurenzi's silky smooth goal off of a give-and-go with Birdie Shaw. From that point forward, though, it was all Lindenwood (4-23-2, 4-9-2 CHA) in what was likely a death blow to the Nittany Lions' chances of finishing out of the CHA cellar.

Here's the Lindenwood recap, followed by the live blog.

The Lindenwood women's hockey team picked up another CHA victory on Friday afternoon with a 3-1 road win over Penn State.

The Lady Lions dominated special teams play by going two-for-four on the power play and killing off all four Penn State power plays. Lindenwood finished the game with nine more shots as it had a season-high 45.

Penn State struck first in the game with a goal at the 14:40 mark of the first period. That period was the only one in which the Nittany Lions had more shots than Lindenwood.

The Lady Lions began to control the action early in the second period and it finally paid dividends at the 12:15 mark when Alyssa West scored a power-play goal, with an assist going to Alison Wickenheiser. Lindenwood finished the period with a 14-7 advantage in shots.

The turning point of the game also happened late in the second period. Penn State went on the power play with a little over two minutes remaining, but West was able to get the puck into Lindenwood's offensive zone and kept it trapped there for a lengthy amount of time. Before the Nittany Lions could get out of Lindenwood's zone, they committed a penalty that gave Lindenwood a power play that extended into the third period. The Lady Lions took advantage by scoring 37 seconds into the final period on a goal by Chelsea Witwicke, with assists from Allysson Arcibal and West.

Lindenwood's penalty kill then helped turn away Penn State's best chance to tie the game. The Lady Lions had two penalties within 1:44 of each other, but they were able to kill off both power plays, including a five-on-three for 16 seconds. Penn State also had a man advantage late in the game when it pulled its goalie, but Lindenwood was able to clinch the game when Lyndsay Kirkham was able to get the puck into Lindenwood's offensive end and Caitlyn Post scored an empty-net goal.

Lindenwood is now on a three-game unbeaten streak in league action. The Lady Lions will look to complete their first series sweep of the season tomorrow afternoon with another contest against Penn State at 2 p.m.