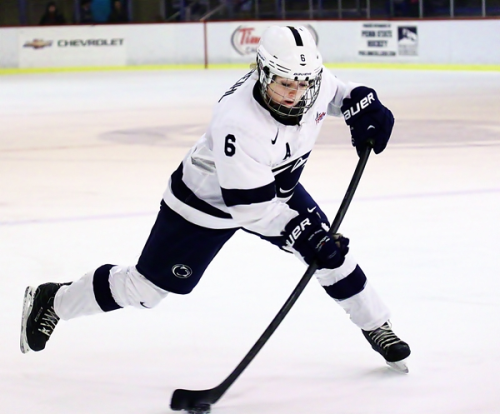 The women's team will hold a Senior Day ceremony on Saturday before its game against Lindenwood, but will only honor half of its senior class, forward Kate Christoffersen.

It's not an oversight. TYT has learned that this season's other senior - defender Lindsay Reihl - will continue with the Nittany Lions in 2013-2014 as she pursues graduate studies in kinesiology.

In bringing Reihl back, Penn State is taking advantage of NCAA Bylaw 14.2.1, which states that student-athletes have five years from the time they first register for classes to complete their four years of NCAA eligibility. Reihl, of course, started her five-year clock in 2009, giving her through the end of next year to get four NCAA seasons in. While the Connecticut native played for the ACHA Division 1 Lady Icers from 2009 through 2012, those campaigns don't count against her NCAA eligibility - essentially, in the NCAA's eyes, she'll be a sophomore next season, but one whose eligibility will expire before becoming a "junior" due to the five-year rule.

It's really quite a story if you think about it: while Reihl is one of ten players on the inaugural NCAA women's and men's teams who came to Penn State before September 17, 2010, the date of the Terry Pegula donation announcement, she will likely be one of just two who preceded elevation and will get to play in the Pegula Ice Arena (men's forward Michael McDonagh, a junior this year, is the other).

This move is just the latest piece of evidence proving Reihl's value. This season, she is one of just nine players to dress for each of PSU's 27 games, and she collected an assist in a 6-1 win over Sacred Heart on October 20th. Reihl has been one of the Nittany Lions' sturdiest blueliners this season, and the A on her sweater nicely reflects her status as a team leader on an extremely young squad. As a Lady Icer, she was named the team's defensive player of the year in each of her three seasons, and helped Penn State to the 2010 ACHA national championship tournament as a freshman. She was also a member of Team USA for the 2011 World University Games - the first women's team sent to the event by USA Hockey - helping the squad to a fourth-place finish in Erzurum, Turkey.

As things stand now, and barring any cuts, the women's team roster will grow to 30 next year (18 forwards, 9 defenders, 3 goaltenders). That unusually large size for a women's team, bolstered by the retention of Reihl, offers some Title IX flexibility to the men, who - again, without cutting anyone - are at 29 (16 forwards, 9 defensemen, 4 goaltenders).
Posted by Kyle Rossi at 2:17 AM