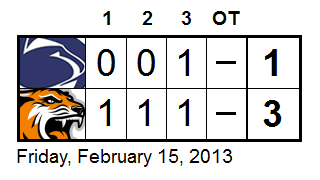 Despite a 3-1 loss to RIT (13-13-5, 6-6-5 CHA) that clinched sixth place in the CHA for the Nittany Lion women (7-21-2, 1-14-2 CHA), there continue to be a lot of encouraging signs of growth. Most obviously, this is no longer a team that needs its goalie to make 60 saves to put a cosmetically good final score on the board. It's a group capable of competing on close to even terms with a team that will probably have home ice in the first round of the league tournament, at least for 40 minutes, and just isn't making those one or two plays that often flip the result one way or another.

To the mindful observer, and although PSU ran out of steam in the third period, there's a huge difference between this game, and the 4-1 loss that opened the series with the Tigers at the Ice Pavilion back in October. We're now at the point where something like a well-executed, but unconverted power play midway through the second just after RIT went up 2-0 is making a difference in these games. On the flip side, Penn State surrendered on two of its first three penalty kills, thanks largely to Kristina Moss, the Tigers' lethal weapon on point, who set up a juicy rebound with one bomb, then scored with another. This is no longer about simply keeping it close, it's about regretting missed chances and the fact that the opponent cashed theirs in.

Most importantly in the short term, head coach Josh Brandwene might be starting to look crazy - like a fox - when he speaks of peaking for the CHA tournament, where anything can happen. I'll admit it: back at media day, when I first heard that line, I rolled my eyes a little. I'm certainly not doing that now, because his team has the look of one capable of taking down any of the possible first-round opponents with a play here or there.

Here's the RIT recap, followed by the live blog:

Yokoyama assisted on all three goals, one in each period to reach the historic milestone. She becomes the fourth active Tiger to reach the milestone. Yokoyama now has 13 goals and 87 assists in 114 career games. Her 87 assists are second all-time at the university.

RIT Head Coach Scott McDonald was happy with his team effort and the atmosphere at Ritter Arena tonight.

"I was excited with our team's effort seen in the game tonight," said McDonald. "We played well in all facets of the game. Our fans were great tonight and it was exciting to see all of the stuffed Tigers get launched onto the ice after our first goal."

The Tigers scored the lone goal in the opening period, out-shooting Penn State, 13-9.

At the 7:03 mark of the first period, Schlattman buried a rebound in the slot after a shot from Moss was blocked for her 12th goal of the season. On the power-play, RIT worked the puck back to the point, where Yokoyama and Moss crossed with Yokoyama feeding Moss for the one-timer. Moss’ shot was blocked with the carom coming to Schlattman who was patrolling the slot. Schlattman fired a high shot over the blocker of Paniccia.

Right after, hundreds of stuffed Tigers came pouring on to the ice as RIT Greek Life sponsored the first Tiger Toss. The Tigers were picked up by the players and workers and will be donated to Strong Memorial Hospital.

Chamberlain had to come up with two big saves in the final two minutes of the period. First, she robbed Gross on a 2-on-1 in close, sticking her left pad out to keep RIT in the lead. Next, she robbed Hannah Hoenshell in close after a RIT defensive break down.

RIT increased its lead to 2-0 after 40 minutes of play.

The Tigers upped their lead to 2-0 at the 6:22 mark of the second period, as Moss fired a rocket of a slap shot past Paniccia for her second goal of the season. Kunichika won the face-off back to Moss, who played catch at the point with Yokoyama. Yokoyama placed a perfect pass to Moss, who from the right circle, blasted the one timer in on the power-play.

Chamberlain continued her strong play later in the period, making a big save on Shannon Yoxheimer through traffic.

Schlattman put the game away with her second goal of the game and 13th of the season with 13:11 left in regulation, as Kuncihika stole a puck from a Penn State defender behind the net and put a pass out in front that deflected off Yokoyama's stick right to Schlattman, who put a low shot from in close past Paniccia.

Gross spoiled Chamberlain's shutout with 3:41 left on the power-play as a shot from Yoxheimer deflected off the stick of Gross in front, off the glove of Chamberlain and in for her fifth goal of the year.