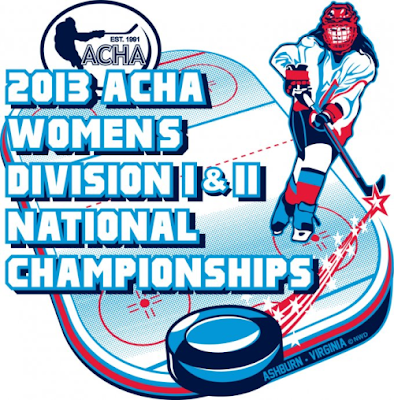 The ACHA WD2 Women's Ice Hockey Club has earned a bid to the ACHA National Tournament March 7th through 10th in Ashburn, VA, by virtue of being ranked in the top four of the East Region in the final poll of the season, released Wednesday (despite an ACHA release from last week giving the 19th as d-day, forcing me to do a separate post instead of holding Club Sandwich for an extra day... never change, ACHA). Here's the final poll:


Joining PSU, which is 6-2-1 overall, at the Ashburn Ice House will be West Chester, California (PA) and Delaware from the East Region, and Alaska, UW-Stout, North Dakota State and Minnesota-Duluth from the West Region. Stout, which defeated Alaska in last season's championship game, will be one team to watch, as will the Nanooks, of course.

But don't sleep on Penn State, despite a fourth seed that, really, had a lot more to do with the team's light schedule than with its competitiveness. PSU played a tough series at Cal to open the season, losing two (one in overtime) by a combined three goals. By late January, the team was capable of playing West Chester, the east's top seed, to a road split featuring two evenly-played games. The WIHC has also posted decisive wins against uninvited-but-ranked teams Michigan State, Maryland and Slippery Rock.

PSU boasts, probably, the division's best goaltending tandem in Katie Vaughan and Sarah Eisenhut to go with the scoring of big guns Devon Fisk and Mandy Mortach, the veteran leadership of letter-wearers Carly Szyszko, Mary Kate Tonetti and Elizabeth Denis, and a sturdy defense that includes Allie Rothman, Ashton Schaffer and Tara Soukup. In other words, provided a team that has played nine games this season can survive five in four days, there's no reason whatsoever to omit PSU among the contenders.

The tournament format will involve two pools of four teams, with each including a mix of eastern and western entries. A round robin will take place on March 7th and 8th, with the top half of each pool advancing to semifinals March 9th ahead of March 10th's championship game.

Before heading to nationals, the team will play one last regular season game, February 22nd at 8:00 p.m. in the Ice Pavilion against Slippery Rock. Through that game, the WIHC will hold the distinction of being the last Penn State intercollegiate hockey team to play a game at the soon-to-be-replaced barn.
Posted by Kyle Rossi at 1:37 PM