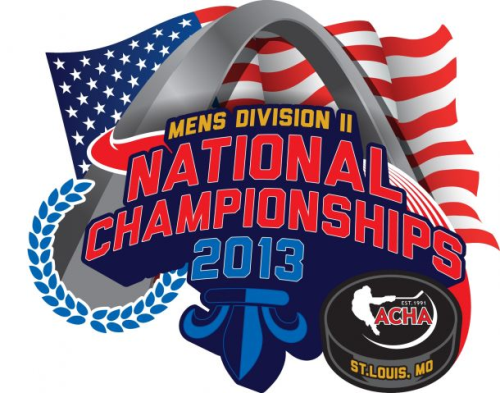 On Monday, and for the second consecutive season, the Ice Lions earned an autobid to the ACHA National Championships by finishing the season ranked in the top two of ACHA Division 2's Southeast Region.

In all, eight teams are now officially bound for St. Louis March 15th through 19th by virtue of the autobid route:

The other half of the nationals field will be determined through four sets of regional playoffs including the teams ranked third through tenth over the weekend of February 22nd through 24th - those will narrow things down to two additional qualifying teams per region. Notably, PSU Mid-Atlantic College Hockey Association (MACHA) rivals UMBC (3rd), Liberty (4th), Virginia Tech (7th), Rider (8th), Rowan (9th) and Maryland (10th) will all participate in the Southeast's tournament.

From there, the 16 contenders will be assigned to four pools, each containing one team from each region and also one team from each seeding band - so the Ice Lions are guaranteed to draw one of Marist, Grand Valley State or Utah State in their pool, if you're following along. Each team will play the other three pool members over the first three days of the tournament, with pool winners advancing to the semifinals on March 18th, ahead of the championship game on March 19th.

Last year in Fort Myers, FL, the Ice Lions blasted Siena 5-0 and Northern Arizona 9-0 before being eliminated 4-2 by Grand Valley State, which won the pool and went on to lose to host Florida Gulf Coast in the championship game. 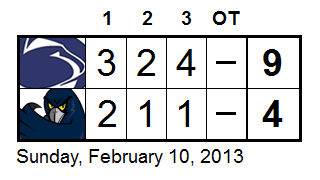 While almost an afterthought next to the leading news, PSU finished out its regular-season schedule by clubbing Monmouth on Sunday afternoon in a game making up for a Hurricane Sandy cancellation back in October.

Details of the win (beyond the score by periods, obviously) were not available as of late Monday night but regardless, the Ice Lions have closed the regular season 23-4-1 and on a 14-game winning streak. Superficially, it reads a lot like last season, when PSU broke off a 20-game winning streak to close the regular season, then added five more through the MACHA playoffs and nationals before the aforementioned loss to GVSU ended both the streak and the season.

Speaking of the MACHA playoffs, the Ice Lions, owners of a perfect 10-0-0 MACHA North Division record, will be the top seed for the league's tournament this coming weekend in Abingdon, MD. Penn State's first opponent will be Temple on Friday at 8:00 p.m., then (assuming wins) the winner of a Rider/Rowan game on Saturday at 5:30 p.m. and the winner of the MACHA South half of the bracket (which includes UMBC, Liberty, Virginia Tech and Maryland) for the title on Sunday morning at 9:45 a.m. PSU is 9-0-0 this season against teams appearing at MACHAs.

For the ACHA WD2 Women's Ice Hockey Club, 6-2-1 overall, a tough first season with respect to scheduling took another blow over the weekend when a highly-anticipated series at WD1 Buffalo was cancelled (and will not be made up) due to Winter Storm Nemo.

There is good news, though. First, and most significantly, the team has verified its eligibility for the WD2 national championship tournament with the ACHA despite just playing eight association games (Navy was not registered at the time of PSU's 9-1 win on January 13th). On a related note, and following a crucial split with second-ranked West Chester on January 26th and 27th, Penn State was ranked as the East Region's number three team on February 2nd.


One more ranking for this season will follow on February 19th, when the top four teams from each region will be invited to nationals March 7th through 10th in Ashburn, VA.

Regardless of an invite to ACHAs, PSU will play its last regular season game on February 22nd against Slippery Rock - the only Ice Pavilion match for the team this season, and the last Ice Pavilion game for any of Penn State's intercollegiate teams.
Posted by Kyle Rossi at 12:20 AM