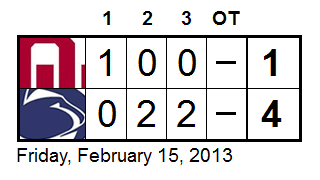 After falling behind 1-0 in the first period, the Penn State men's hockey team scored four unanswered goals as it skated to a 4-1 exhibition victory against the ACHA's Oklahoma Sooners at Greenberg Ice Pavilion Friday night.

Penn State outshot Oklahoma by a 41-32 margin and finished 1-for-5 on the power play, while the Sooners were 0-for-5 with the man advantage. Sophomore netminder PJ Musico (Orange, Calif.) turned aside 31 shots, and Oklahoma goaltender Colin Fernandes made 37 saves.

Greenberg gave Oklahoma a 1-0 lead with 51 seconds remaining in the opening frame. Augie Hoffman received Mason Miller's pass at the left point and found Greenberg near the bottom of the right circle for the backdoor goal.

Penn State struck twice in the second period to take a 2-1 lead. With 10:54 left in the second, Longo tied the game following an Oklahoma turnover. Sophomore Jacob Friedman (West Bloomfield, Mich.) intercepted a Sooner outlet pass along the boards and fed Longo in the slot, where his wrister beat Fernandes high.

Yanis put Penn State ahead, 2-1, 5:28 later. Junior Justin Kirchhevel (Brookings, S.D.) stopped an Oklahoma clearing attempt from behind the cage and fed a pass to Yanis above the left circle. The Grosse Pointe Woods, Mich., native took a stride toward the net before his shot through traffic beat Fernandes.

In the third period, Brooks made it a two-goal game just 36 seconds into the stanza. After getting the puck from Curtis Loik (North Vancouver, B.C.), Brooks spun around a defenseman and scored on a low shot. Holstrom added a power-play tally with 14:28 left in the game. After receiving a pass from Yanis at the top of the left circle, Holstrom wristed a shot past Fernandes to account for the 4-1 final.Penn State and Oklahoma will conclude their two-game series Saturday, Feb. 16 when the teams play the final Penn State hockey game at Greenberg Ice Pavilion. [Note: Categorically false, so I'm crossing it out. The ACHA D2 women are "Penn State hockey," and have a game remaining at the rink.] Opening faceoff is set at 3:30 p.m.
Posted by Kyle Rossi at 10:00 PM