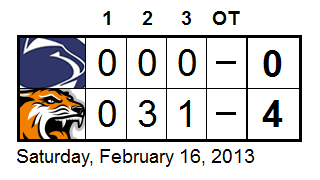 The Nittany Lion women (7-22-2, 1-15-2 CHA) dropped a disappointing, but not discouraging, 4-0 decision at RIT (14-13-5, 7-6-5 CHA) Saturday night. The game became rather heated in the late stages - notable because the Tigers' now-completed sweep of PSU, combined with Lindenwood's simultaneous sweep of Robert Morris in St. Louis, make Rochester the most likely destination for Penn State when the CHA tournament gets underway in two weeks.

Next weekend, PSU closes its regular season with a pair at RMU. Elsewhere in the CHA, RIT travels to Mercyhurst, while Syracuse hosts Lindenwood. Sweeps by both Lindenwood and Mercyhurst would send the Nittany Lions to LU (which is even with Robert Morris in the standings, but owns the tiebreaker) for CHAs, while any other result sets up a rematch with RIT.

A summary of the rapidly-solidfying league standings: Mercyhurst clinched the regular season title over the weekend by sweeping Syracuse, which has clinched second. Both teams will receive byes to the tournament semifinals, which will be hosted by the top-seeded Lakers. On the other end, Penn State is locked into sixth, and - barring the scenario outlined above - will head to third-place RIT in for the best-of-three first round of the playoffs. Lindenwood and Robert Morris are currently tied for fourth in points and (again, unless LU sneaks into third) will likely play each other in the first round, with home ice between the two still up for grabs.

Here's the RITathletics.com recap, followed by the live blog.

RIT out-shot Penn State, 45-20. RIT goaltender Laura Chamberlain (Norco, CA/LA Selects) stopped all 20 shots she faced to record her second shutout of the season and 12th of her career. Chamberlain made a handful of big saves in the third period to preserve the shutout.

The Tigers have clinched home ice for the upcoming CHA postseason tournament and will host a best-of-three series at Ritter Arena from March 1-3.

"I was excited with the way we played the entire game," said McDonald. "I couldn't be happier for our senior class, they were great tonight. The second period was one of our best of the year."

Neither team scored in an opening period that featured just a handful of stoppages and no goals. RIT held an 11-5 edge in shots on goal, but missed several wide.

Paton had a great chance stopped by the glove of Paniccia with 4:23 remaining, interrupting a 13-minute span between whistles. On the ensuing face-off, Maugeri rang a shot off the post.


Penn State had its best chance of the period with three minutes left in the period, as Shannon Yoxheimer fired a shot from the left wing that Chamberlain looked to have smothered, but the puck got behind the goaltender and was sitting in the crease for a few tense seconds before Morgan Scoyne (Drumbo, Ontario/Stoney Creek Sabres) knocked it away.

The Tigers played one of their better periods of the season in the second, scoring three times, while out-shooting the Nittany Lions 24-4 to take a 3-0 lead into the intermission.

Schlattman got the Tigers on the board just 2:08 into the period, as she shoveled a pass from Kunichika from in close off the post and in for her team-best 14th goal of the year. Great work by Tenecia Hiller (Brampton, Ontario/Brampton Thunder) and Kunchika down low made the goal, as Schlattman was alone in front for the goal.

RIT nearly made it 2-0 on the power-play moments later, as Hiller was denied three times in succession in front, first on a deflection, then on two rebounds.

Maugeri gave RIT a 2-0 lead at the 12:48 mark, slamming in a rebound after a shot by Zach was stopped. Paton kicked a pass in the neutral zone to Zach, who came flying in on the right wing. She had her initial attempt stopped by Paniccia, but Maugeri was there to stuff home the rebound for her seventh goal of the year.

That line struck again with 1:09 left in the period, as Zach collected a cross-ice pass from Paton on the rush to put the puck past Paniccia for her fourth goal of the year. Maugeri also assisted on the goal.

Kuncihika concluded the scoring with 4:43 left in regulation, stealing a puck into the neutral zone, flying into the Penn State zone, and putting a low shot through the pads of Paniccia for her ninth goal of the season.

Tonight was the fourth regular season meeting between the two squads, with RIT holding a 3-0-1 edge. On Oct. 25, RIT defeated the Nittany Lions 4-1 at Penn State, while the two teams skated to a 2-2 tie the next night. Last night, Schlattman scored two goals, while Ariane Yokoyama (Van Nuys, CA/LA Selects) dished out three assists to become the 12th player in the history of the RIT women’s hockey program to record 100 career points in a 4-1 RIT win.