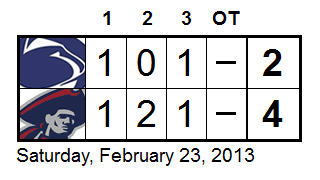 Here's the RMU recap and video of the goals, followed by the live blog.

The Colonials honored the class of 2013 before today's contest for senior day, as three members of the senior class tallied points in game two of the series.

In similar fashion to last night's contest, RMU maintained control of the first period versus the Nittany Lions. The Colonials outshot Penn State, 12-3 throughout the first frame. Robert Morris held PSU shotless until the 9:45 mark of the period. At 15:21 of the first frame, RMU scored the opening goal of the contest as sophomore forward Rebecca Vint (Caledon, Ontario / Brampton Jr. Thunder) scored her 16th goal of the season. Freshman defenseman Megan Eady (Renfrew, Ontario / Nepean Wildcats) hit junior assistant captain Thea Imbrogno (Etobicoke, Ontario / Mississauga Jr. Chiefs) at the point who then found Vint on the right goal post for the first Colonial goal of the game. The assist is the second of Eady's freshman campaign and the 10th of the year for Imbrogno.

The second period proved to be the most successful for the Colonials as RMU scored two goals including the game-winner throughout the second 20 minutes of action.

Robert Morris would regain the lead as the Colonials scored an extra-attacker goal on a delayed penalty just 3:45 into the second period. Senior forward Courtney Langston(Warrensburgh, Mo. / Shattuck St. Mary's) hit junior defenseman Brandi Pollock (Virden, Manitoba / Westman Wildcats) with a pass in the left offensive faceoff zone. Pollock then found senior captain Dayna Newsom (Oakville, Ontario / Oakville Ice) on the right post for the second RMU score. The assist is the first of the season for Langston while Pollock registered her sixth of the year and second of the series with Penn State. The goal is the fourth of Newsom's senior season and her second of the series with the Nittany Lions.

The Colonials then took a 3-1 lead with 3:19 left in the period. Imbrogno found junior defenseman Anneline Lauziere (St. Thomas, Ontario / London Jr. Devilettes) who then passed off to fellow defenseman Kylie St. Louis (Windsor, Ontario / Southwest Wildcats). St. Louis fired a shot from outside the right faceoff zone that found the cage over the right should of Penn State netminder Celine Whitliner. The assists marks the 11th of the year and second of the game for Imbrogno while Lauziere tallied her third of the year. St. Louis' goal is her fourth score of the season and first game-winning goal.

RMU again dominated the shot count in the second period as the Colonials outshot the Nittany Lions, 24-2.

With 10:34 on the clock in the final frame, RMU added to its lead with a goal by senior assistant captain Cobina Delaney (Stittsville, Ontario / Ottawa Jr. Senators). After junior forward Kristen Richards (Toronto, Ontario / Niagara University) won a faceoff, Lauziere blasted a shot wide of the cage that allowed Delaney to find the puck and put in net on the wrap-around attempt. The goal is sixth of the year for Delaney and her second in two games. The assist marked Lauziere's second of the contest along with her fourth of the season and is Richards' 13th assist as a RMU Colonial.

At the 13:52 mark of the third period Penn State scored in a comeback effirt, but RMU skated the reminder of the period without giving up another goal. The second Nittany Lion goal was scored by Gross as Yoxheimer tallied notched the only assist.

The final shot count favored RMU, 57-12. The Colonials also won 39 of 58 faceoffs on the afternoon.

Next weekend, RMU will play a best-of-three series in the first round of the CHA playoffs. The Colonials opponent and location of the series is yet to be determined due to the Lindenwood and Syracuse series from this weekend being postponed. The two teams will faceoff Wednesday and Thursday of the upcoming week at 7 p.m. As long as Lindenwood does not sweep the Orange, Robert Morris will host the Lions in the first round.