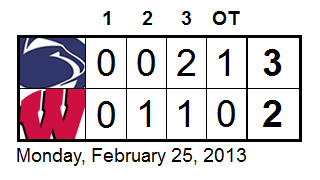 Penn State, a first-year NCAA Division I program featuring eight members who arrived in Happy Valley before Terry Pegula's donation announcement, went into the Kohl Center Monday night to play a nationally-televised game on Big Ten Network against Wisconsin. The Badgers, after a slow start to their season, had gone 13-3-5 since December 1st to climb to 16th in this week's USCHO poll and - more importantly - 19th in the pairwise rankings. In front of 9,078 hostile fans, the Nittany Lions rallied from a two-goal third-period deficit to win 3-2 in overtime and, despite having nothing tangible to play for themselves in their final game of the season, effectively end historic power Wisconsin's chances of receiving at at-large bid to the NCAA tournament.

Did I get that right? Unreal. This offseason is going to take forever.

For the record, Penn State finishes:
Less than one year ago, we were mourning a loss to Oakland in the ACHA national tournament and the championship-free death of the Icers.

More thoughts when I'm able to express them coherently, of course. For now, here is the GoPSUSports.com recap, with what was one of the more fun live blogs I've ever done at the bottom.

Junior forward Taylor Holstrom (Yorba Linda, Calif.) scored the game-winning goal with 34 seconds left in overtime as the Penn State men's hockey team erased a 2-0 deficit in a 3-2 overtime victory against No. 16 Wisconsin in its season finale at the Kohl Center Monday night.

The Nittany Lions, who defeated a ranked opponent for the first time and improved to 3-2-0 against future Big Ten opponents, finished their inaugural NCAA Division I campaign at 13-14-0. Penn State, which also defeated Michigan State Jan. 26 in its only other appearance on BTN, improved to 10-2-0 when scoring a power-play goal.

Penn State found itself down 2-0 in the third period after goals from Mark Zengerle and Jason LaBate. The Nittany Lions then began to claw back beginning with Holstrom's marker. The forward tallied his first of the game at 6:48 of the period and, with 7:44 left in regulation, Casey Bailey (Anchorage, Alaska) tied the game with a power-play marker.

The stage was then set for Holstrom's heroics in the overtime frame. Bailey gloved a clearing attempt at the blue line and worked the puck toward the cage. After Max Gardiner's (Deephaven, Minn.) attempt was stopped, Holstrom fired the game-winner to the back of the cage.

Freshman netminder Matthew Skoff (McKees Rocks, Pa.) matched a career-high with 42 saves while Landon Peterson stopped 33 shots for the Badgers. Wisconsin outshot the Nittany Lions, 44-36, and went 0-for-4 on the power play. The Nittany Lions finished 1-for-4 with the man advantage.