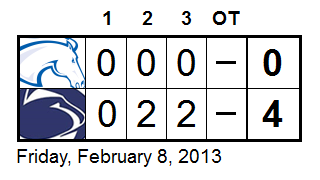 The Nittany Lion men improved to 15-15-0 in all games, 11-13-0 in NCAA games and 9-11-0 against NCAA DI with what, in hindsight, was quite a dominating win over Alabama-Huntsville in round one of the so-called Independent League MegaBowl - but one that still contained enough juice (mostly in the form of late chippiness) to set up an interesting match on Saturday. Here's the GoPSUSports.com recap, followed by the live blog.

Freshman forward David Glen (Fort Saskatchewan, Alta.) notched the first hat trick in program history to lead the Penn State men's hockey team to a 4-0 victory against Alabama Huntsville at Greenberg Ice Pavilion Friday night. The Nittany Lions improved to 11-13-0 with the whitewash, while the Chargers fell to 3-18-1.

After a scoreless first period, Glen opened the scoring just 1:41 into the second before Gardiner tallied for the first time since Oct. 27 with 4:29 left in the frame. The Nittany Lions added a pair of goals within a 3:30 span in the third period as they skated to the 4-0 lead. Glen added his second of the game at 11:20 of the period before completing the hat trick with 5:10 left in the game.

Penn State out shot the Chargers by a 43-23 margin and went 1-for-6 on the power play, while Alabama Huntsville finished 0-for-4 with the man advantage. Charger netminder John Griggs made 39 saves.

The two teams will conclude their weekend series Saturday, Feb. 9 with a 7:30 p.m. faceoff.

After a scoreless first period, Glen put Penn State on the board less than two minutes into the frame. Griggs stopped a dump-in behind the net, but Brooks won the battle to the puck and sent a diagonal pass from behind the goal line to Glen at the left circle, where he fired the puck past Griggs.

While on the power-play, Gardiner collected his third marker of the season at 15:31. From the left hash marks, Casey Bailey (Anchorage, Alaska) passed to Holstrom in the slot, where he one-touched it to Yanis at the point. The defenseman unleashed a slap shot that Gardiner redirected past Griggs from the top of the crease.

Glen gave the Nittany Lions a 3-0 advantage with 8:40 left in the third period. Brooks sent the puck to Peter Sweetland (Newtown, Pa.) at the blue line, where he fed Glen at the top of the left circle. With a defenseman draped over him, Glen roofed a turnaround shot for the goal.

With 5:10 left in the game, Glen added his third of the game and team-leading 15th goal of the season. Glen won the offensive zone faceoff back to junior Michael McDonagh (Winchester, Mass.), whose shot from the right circle was stopped by Griggs. Glen located the rebound and it slid it to the back of the net to account for the 4-0 final.