So...if you haven't noticed, I've been completely inactive since Friday. No posts, no Twitter, nothing.

While I usually try to be as upfront as possible with you guys about things, in the interest of not airing my dirty laundry, I'm going to be a little cryptic here. So, on that note, the short version of events is that I've had continuing issues with certain people, and I felt that those issues were compromising the quality of the blog. With that in mind, I decided to completely bail on things for the weekend to get my head back and let my frustration dissipate. Did it work? I guess we'll find out together, won't we?

The purpose of this post will just be sort of a quick one-time catch-up on everything that's happened since Friday afternoon so that I can get straight back into regular programming from here. Presumably most of you know most of it by now, but just for posterity's sake...

Due to context, the ACHA D2 Southeast No. 2 Ice Lions' weekend road sweep at Southeast No. 7 Rider (4-3), at St. Joseph's (5-2) and at Southeast No. 3 UMBC (4-1) - as well as their now-likely return trip to the ACHA National Championships - has to be considered the top story for this post. 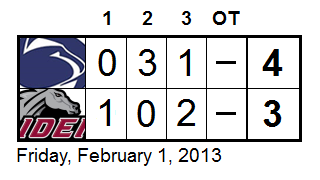 Mike Broccolo's power play goal tied things up early in that middle period after the Broncs were spotted a 1-0 lead at the first intermission. Just after a Tyler Person interference penalty ended, Peter Daley and Taylor Vincent made the score 3-1 with goals 13 seconds apart. Ryan Urban's 4-1 goal midway through the third ended up being the winner after RU's Chris Daley and Connor Fox connected on 5-on-3 situations in the last five minutes to make things interesting. 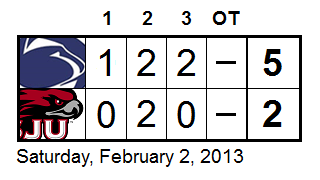 Neil Laessig's pair of goals were key in the Ice Lions' sandwich-game win over the Hawks. Laessig scored late in the first period, then 2:24 into the second - or 2:00 after SJU had tied the game - to keep PSU afloat early.

Once the Hawks tied things up once again, Urban took over with his second consecutive game-winning goal at 11:31 of the period. The sophomore from Chester Springs, PA would add a late insurance goal, after Franky Reluzco, fresh out of the penalty box and on an Ice Lions' power play, made the score 4-2 early in the final period. Reluzco and SJU's Mark Boczar both took penalties at the end of the second period, but Boczar's was a major, giving the Ice Lions a three-minute advantage. 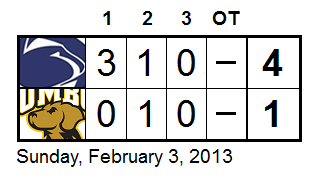 Thanks to early power play goals from Lewis and Reluzco, as well as an even-strength effort from Will Vaeth, PSU put the Sunday showdown with UMBC on ice early, and cruised to the finish line in a rematch of last season's MACHA championship game.

When the Retrievers thought about a comeback, via Daniel Durantaye's power play answer midway though the second, Fredrik Linge was there to restore the three-goal lead after 40 minutes and ensure that the Ice Lions' winning streak hit 13, part of a 22-4-1 overall record.

While nationals bids aren't official yet, PSU has just one regular season game remaining, at Monmouth this coming Sunday, in a makeup for an October game postponed by Hurricane Sandy. Since that date happens to also be the due date for the last ranking of the season, the one establishing nationals autobids and regional seeding, it's now (thanks to the weekend sweep) extremely, extremely unlikely that the Ice Lions will be outside of the Southeast Region top two (the autobid teams) when the poll is released, regardless of what happens against Monmouth.

Interestingly, the ACHA tournament for D2 is in St. Louis from March 15th through 19th, meaning that the Ice Lions will likely be the last Penn State hockey team playing this year, just as they were last year. Nationals for the ACHA women (should they qualify) run March 7th through 10th, while the seasons for the NCAA teams end on February 25th (men) and no later than March 9th (women).

PSU played its likely last-ever games against former ACHA archrival Ohio, collecting a pair of wins, including one in front of 6,107 in Hershey, to improve to 14-15-0 in all games, while remaining 10-13-0 in NCAA games and 8-11-0 against NCAA Division I.

By the way, in case anyone is wondering (since I've never fully explained it), my insistence on giving three records for the men this season stems from the fact that I really don't see much value in the official NCAA record, which includes games against NCAA Division III opponents that aren't any better in quality than the ACHA teams not counted. "How does PSU measure up with DI competition?" is a much more pertinent question than whatever question is answered by a combined DI/DIII record, and I also include an "all games" mark because I don't accept the official designation of "exhibition" for the ACHA games, not when stats against a crap DIII like Fredonia are counted.

For a while I only gave a DI record and an all games record, until a PSU representative needlessly called me to complain about the practice back in December... oh right, I'm not airing my dirty laundry. 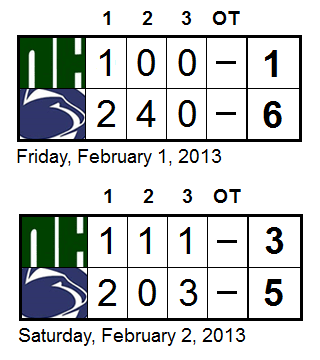 In the name of having someone who actually saw the games (it was a full-on mini-hiatus, I wasn't kidding about that) write the recap, here's Mary Clarke of Victory Bell Rings.

The men’s first game of the weekend actually took place in Hershey, Pa. at the GIANT Center in front of a mostly Penn State crowd. The Bobcats got the early lead a little over six minutes into the first frame off of forward Nick Rostek but the Nittany Lions were able to bounce back with six unanswered goals of their own. Casey Bailey netted two, Kenny Brooks had one goal and two assists, Connor Varley had two assists, David Glen got one to the back of the net as well, and combined the team went +20 for the night with 37 total shots reaching Ohio’s goaltender. The game was a great defensive showing for the Nittany Lions as well, allowing only 14 shots to reach netminder PJ Musico and blocking six additional Bobcat shots.

Saturday’s game at home started off similarly to Friday’s, with the Bobcats taking a lead early in the first period, this time just less than two minutes into the frame. However, Casey Bailey and George Saad would counter for the Nittany Lions with two goals in under three minutes to give Penn State their first, but not only lead of the game. A quick goal in the beginning stages of the second period for Ohio would tie the game at 2-2 but after a scoreless frame afterwards, the Bobcats would grab their second lead of the night with a Brett Agnew goal just 38 seconds into the third. Ohio wouldn’t get the lead back again after Peter Sweetland capitalized on a Bobcat defensive error and turned the tables in favor of the Nittany Lions. Curtis Loik and Casey Bailey would cap off the scoring to make the rallying comeback complete with a final score of 5-3. Goalie Matthew Skoff faced a fair number of Ohio shots – 37 of them – and was able to stop 34 for the win. While the wins feel nice, the two games against Ohio do not count in the standings so the team still sits at 10-13-0 for the season.

The women - now 7-19-1 (1-12-1 CHA) - once again demonstrated their improvement over the course of the season by forcing Mercyhurst to earn their wins at the Ice Pavilion. PSU faces a pretty important series this coming weekend - the final home games of the year - against Lindenwood. LU sits fifth in the CHA standings with eight points, while PSU is sixth with three. With only four regular seasons games left for each team following their head-to-head, a Nittany Lions sweep is all but essential for Penn State to avoid being the last seed for its first league tournament. The women’s team had a rematch against No. 7 Mercyhurst starting Friday night at the Greenberg. Penn State was in trouble early, giving up a three goal lead to a deadly Laker team. However, the Nittany Lions tightened up and scored two goals on the Laker goalie, Stephanie Ciampa. Hannah Hoenshell notched her eighth goal of the season at 6:21 in the second frame and Jordin Pardoski added a power play tally that, at the time, put the game almost within reach at 4-2 to Mercyhurst. However, the Lakers were able to hold on to the win despite Penn State’s late game surge. Celine Whitlinger was in net for the Nittany Lions and played an outstanding game, saving 59 shots on 64 attempts. The Nittany Lions were also better in the shot category in this game than they have been recently, getting 19 shots to the net.

Saturday’s game started off rough with four unanswered Mercyhurst goals. PSU goalie Nicole Paniccia was able to stop all 11 Laker shots in the first period and did end up saving 46 of the Lakers’ 50 shots. Jill Holdcroft scored her ninth goal this season on the power play with three seconds to go in the game to break Penn State’s shutout. The Nittany Lions totaled 12 shots on goal and had another 5 blocked by the Mercyhurst defense. The spirited effort by the team fell short; however, and the two losses for the weekend put their record at 7-19-1 this season.

In the aftermath of the games (except for the Ice Lions-UMBC one, I suppose), the big news was the Centre Daily Times' front-page story on Sunday regarding the progress of the Pegula Ice Arena, featuring a tour from Joe Battista.

I suppose at this point, there's not going to much in the way of new information - wait... the student section is as steep as code allows?!?! - given that the thing is pretty well on its way to being completed. Still, it's nice to see the latest, publicity is always good, and there's certainly going to be a thing here or there that's news-ish. Like...


The arena, other than melting the ice for about two months each spring for a few events such as commencement, will be almost exclusively for events on ice. They did not purchase covers to put over the ice and have other events on top of it.

Guess that arena football team for State College is on hold.

I greatly enjoy Andrew Dzurita's recruiting articles for Lions 247 and this one, featuring 2013 forward Dylan Richard, is his latest effort. Here's your money passage.


The 19-year-old center started speaking with the Penn State coaches after former Spruce Grove Saints (AJHL) teammate David Glen committed to the Nittany Lions, and developed a nice rapport with the staff.

“It was Keith Fisher initially. He really started it out where we got to know each other a little bit,” recalled Richard, who chose the Nittany Lions over Minnesota-Duluth, Ohio State and North Dakota. “I went down to Penn State in mid-December on a visit before committing and I thought it was great. Great people, a great campus, good atmosphere, just an overall good feeling.

“They’re a great group of people, all of the coaches. They’re easy to talk to, fun to be around. Being around them made my decision a lot easier.”

Hahahaha hate you, North Dakota.
Posted by Kyle Rossi at 2:26 AM