Penstone Will Not Return as PSU PxP (Updated) 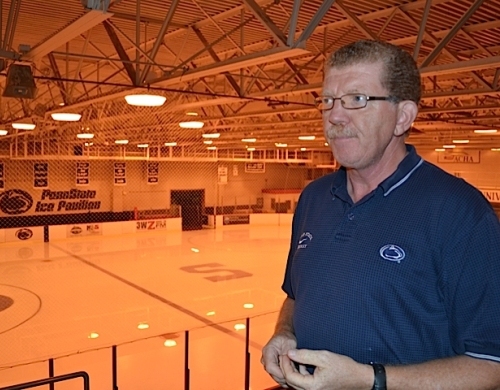 Long-time Penn State hockey play-by-play broadcaster Steve Penstone is moving on after 11 seasons, as disclosed by his Twitter account and confirmed through sources.

Beginning with the 2002-2003 season, Penstone's voice became synonymous with Penn State hockey. Through changes in platforms, coaches and partners - Fight On State to GoPSUSports All Access, audio to video, Joe Battista to Guy Gadowsky, John Mulhern to Tim King - Penstone was always there to tell us when someone went top shelf and disturbed grandma's peanut butter, and his sense for the flow of a game was unmatched. His run included the 2003 ACHA National Championship, which involved a Penn State shutout of host and archrival Ohio in the championship game, as well as PSU's first NCAA season, a happening once written off as impossible.

The former Toronto police officer and proud Canadian also provided Icers followers a mid-week inside look at the team through his popular View from the Booth blog usually including healthy doses of player and coach interviews. He often went the extra mile on his broadcasts, eschewing those old standbys of silence or music during intermissions for score updates, interviews and discussion. Thanks to both he and his wife Barb, the underappreciated "executive producer," Icers fans enjoyed an ability to follow the team superior to the offerings of any other ACHA program, and this blog written by an out-of-stater owes a debt to both of them, particularly during the first two pre-varsity seasons. An intermission interview back in 2011 at Ohio's Bird Arena gave TYT a nice bit of early exposure as well.

In a Pennsylvania Puck feature last year marking a decade of Penstone behind a blue and white mic, he said something that may have proven eerily prophetic:


For those such as Penstone who have been intimately involved with what he calls the “Icers family,” the arrival of D-I hockey summons mixed emotions.

"Because you lose that family atmosphere and all of a sudden it becomes a business,” Penstone said. “But, everybody’s wanted it, and now it’s here.

"The Icer family will still be here. It’ll just be a little different. Families always go through that type of change."

Broadcast details for the 2013-2014 season have not been released yet, but it's assumed that Big Ten Network will play a heavy role in showing Penn State games. Even when the Nittany Lions are not on television, most contests are expected to be carried on BTN's digital platform. It's unknown right now whether any shift in the nature of PSU's media arrangement led to Penstone's departure.

It is with regret and sadness that I'm writing to let you know that I will not be returning to the Penn State hockey broadcast booth for the 2013-14 season.

Obviously, Barb and I are in shock right now, but we both know that the road ahead offers us new challenges and opportunities.

We would like to thank each and every one of you for your support, and most importantly your friendship, over the past eleven seasons. The bond that is the Icers family will never be broken.

No matter where the road ahead takes us, we will always look forward to seeing you and sharing a laugh at some point in the future.

We love you all.