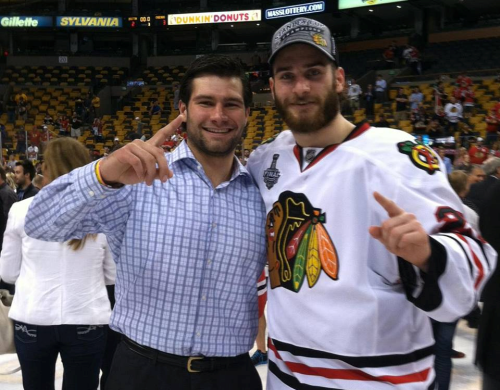 3. Hockey or Football on Homecoming weekend? Penn State question of the day
(PennLive)


The brand-new Pegula Ice Arena will open its doors for the first NCAA hockey contest in its history, featuring the Nittany Lions against Army Friday night, Oct. 11. The next day is State's annual Homecoming game, and it should be a must-see game, as well, with Michigan coming to town for a 5 p.m. kick.

If you could only attend one game that weekend, which would it be? That is the Penn State question of the day.

Yes, I'm biased, but how is this even a question? Penn State football will play Michigan at home again in 2015. Penn State hockey will not be opening the ice arena that the university has needed for 100 years again in 2015.

2. A look back at highlights from the 2012-13 Penn State ice hockey season
(Stack the Pads)

Nothing wrong with a peek back before plowing forward, and Derek Meluzio has you covered in that department with photos, videos and memories galore.

As I'm sure you know, the Chicago Blackhawks won the Stanley Cup last Monday with a stunningly quick game six rally in Boston to flip the result of a contest that previously looked like it would push the championship series to a seventh game. You probably also know that rookie Hawks forward Brandon Saad, a Pittsburgh-area native, is the younger brother of George Saad, who just completed his senior year with the NCAA Nittany Lions after three with the ACHA Icers. Regardless, it's not every day that a Penn Stater gets to celebrate on the ice with the Cup, so you can stand to hear it again.

Here's hoping the scene is duplicated someday, except with the Penn Stater in the beard and uniform. And involving pretty much any team besides the Blackhawks. The Islanders, Blues, Caps and Canucks would all work under the right circumstances. Your weekly PIA photo, combined with some news:


Successful test of the Ice plant at Pegula Ice Arena & raised scoreboard to the rafters! 72 days until we move in!

Seventy-two days from the June 26th tweet is Friday, September 6th. Going to go ahead and guess that not a whole lot of work is getting done on University Drive that afternoon.

Have I mentioned lately that I think the Buckeyes' stunning ejection of head coach Mark Osiecki a couple months ago was a huge mistake? Thanks to some great reporting from B5Q's Andy Johnson, we now know that OSU is up to five decommits since the coaching change. Zach Stepan, a teammate of Eamon McAdam with the Waterloo Black Hawks last season and a 2012 Nashville Predators draft pick, was the big blow in my opinion, but based on what I know about Tyler Sheehy, Jack Dougherty, Cliff Watson and Nolan Valleau... well, Osiecki wasn't a terrible recruiter, put it that way.

Hypothetical funsies: What if NHL teams were only allowed to draft women's NCAA players? The sole CHA player to be "selected" was Mercyhurst forward/conference player of the year Christine Bestland, as she went off the board 19th to Columbus, using the pick acquired from the Rangers as part of the Rick Nash trade. Don't ask me why trades of male players still count in a women-only league. 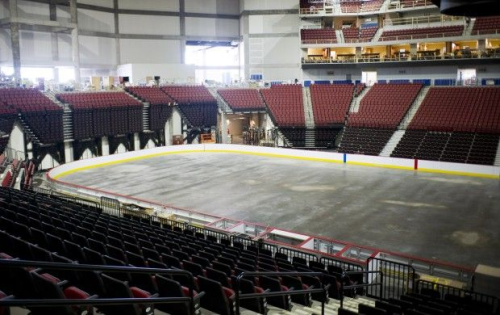 Pinnacle Bank Arena, the soon-to-be-open palace for Nebraska men's and women's basketball, is able to maintain a sheet of ice. If you need it. Anyone still want to argue for Illinois being the next Big Ten school to add hockey?

There actually is a counterpoint, though. At a listed capacity of 12,700 with the ice in, it's a little large for college hockey, and as a multi-purpose arena, Huskers hockey wouldn't have it whenever it wants. Wisconsin recently built a pricey ($27.9 million) auxiliary ice facility to combat similar issues with the Kohl Center. Ohio State suffers from that issue as well with Value City Arena, but with a less luxurious back-up, the OSU Ice Rink. In a world where Pegula Ice Arena is the new bar, is it really smart to enter NCAA hockey with a less-than-ideal facilities situation?

Someone affiliated with the University of Minnesota men's hockey program, senior center Nate Condon, is excited about the Big Ten. I don't really expect him to survive the week up there, but good luck bud.

The Meek Shall Inherit The Ice: Small colleges making it to the NCAA Frozen Four
(USA Hockey Magazine)

A nice look at how the little guys get it done on the game's biggest stage despite the presence of behemoth programs.

It's bound to change at least a little bit in time, but the article is interesting to me in part because Penn State reads more like a small-school program right now. The Lions are still heavy on mid-range prospects and four-year guys and light on the one-and-dones that characterize schools like Michigan and Wisconsin.

Generally, I'm taking a pass on NHL Entry Draft stuff here - most of the pre-gamers are out of date, the aftermath has and will be covered in other posts - but hey, highlights are timeless.

Darren Hersh, the Icers' goaltending coach from 2000 through 2003, has had quite an interesting career - including a recent ECHL championship with the Reading Royals.


"I feel incredibly lucky to have been a part of the special team that the Royals had this past season," Hersh said. "I hardly remember hoisting the Cup, because everything was a blur during the on-ice celebration. Honestly, there have been only a few other times in my life that I can remember being as happy as I was at that moment."

Oh, and because you can do things like this in hockey: two degrees of Eamon McAdam. Jay Williams, mentioned in the article and now at Miami University, is a former student at Hersh's goalie academy. McAdam and Williams were Waterloo Black Hawks teammates from 2010 through 2012.

The ACHA Division 1 Arizona Wildcats' schedule for the coming campaign includes a home series against York University, a CIS school. That one should be a nice measuring stick for both the rebuilding program and for the ACHA as a whole. The Icers lost to the then-Yeomen (they're called the Lions now, unfortunately) 6-1 on January 3rd, 2001. More recently, the CIS' University of British Columbia beat the ACHA's Arizona State and Oklahoma 8-2 and 4-3 (OT) in a holiday showcase on December 28th and 29th of last season.

Finally, congratulations to Robert Morris alumna-turned-assistant coach Brianne McLaughlin, who will once again serve as the CHA's only representative on the United States' Olympic entry for women's hockey next year in Sochi, Russia. The goalie was on the silver medal winning squad at the 2010 Vancouver Olympics and also has a pair of gold medals from the Women's World Championships (2011 and 2013).
Posted by Kyle Rossi at 2:24 AM