So what, exactly, do the New York Islanders and Vancouver Canucks, their fans, and those covering the teams think of their shiny new Penn Staters?

Brace yourselves, it's not quite as sunny on their end as it is on ours. 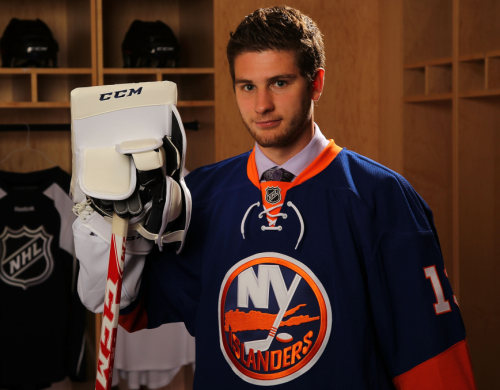 Eamon McAdam (3rd round, 70th overall by the Islanders)

Eamon McAdam is a positional goalie with good patience and quick feet who does a good job finding pucks through traffic. McAdam has a knack of making the big save.

McAdam steps into the pipeline as the Islanders haven't drafted a goalie since the longshot Cody Rosen in 2010 (now out of the organization) and Mikko Koskinen and Anders Nilsson in 2009.

With McAdam headed to the NCAA, the Isles can hold on to his rights for four years if he stays in school, providing ample time to develop on his end and for the Isles to evaluate options on their end.

Projecting a few seasons out, the New York Islanders knew they needed to add one or two more goalies to the system in Sunday's 2013 NHL Draft. They added two from the NCAA, meaning they have a little more time to figure out what might come of them.

There are plenty of interesting forwards and defensemen available in the mid and late rounds, but once the goalies start to go it's like shopping for milk and bread before a snowstorm. The Isles grabbed theirs in the third and fourth rounds, and I have no idea whether they'll ever appear in uniform.

[The third round] is the round where you wondered if an Isles scout got snowed in in Waterloo and fell in love with the hospitality. The Isles took two players from USHL Waterloo just six selections apart (the 70th came their way in the Nino Niederreiter trade).

McAdam is headed to Penn State, so we won't get a better read on him until he gets NCAA games under his belt. His stats this season aren't impressive -- few goalies' are in the USHL -- at .896 save% and 3.45 GAA, but he was on scouts' radars for the ISS and CSS. He was the sixth goalie taken in this draft. He did well in the USHL/Top NHL Prospects game, for what that's worth.

With their 70th pick, the Isles did get a goalie. Not the one I wanted, but a good one none-the-less. Eamon McAdam, who will attend Penn State next season. @EamonMac35 is said to be an excellent fit for the Isles and he can make big saves through traffic. Nice.

The Islanders did finally break the defenseman string by addressing the lack of goalie depth in the system. They selected goaltender Eamon McAdam of the Waterloo Black Hawks (USHL) with the 70th pick overall (the pick they got from Minnesota in the [Nino] Niederrieter trade). He represented the US in the 2012 World Junior A Challenge and compiled a 4-0 mark with a 2.18 GAA and a .927 save percentage. McAdam was ranked number three among goaltenders according to the ISS final rankings prior to the NHL Draft.

He is the first goalie the Isles have taken since taking Cody Rosen (now out of the organization) with their 7th round pick in 2010. With McAdam off to Penn State in the fall, the Islanders hold his rights for four years if he stays in school. This gives the 6’2″ netminder time to develop, and the Isles time to evaluate what they have, if anything.

Eamon McAdam helped Cal Petersen backstop the Waterloo Black Hawks of the USHL during the ’12-’13 hockey season, and the goalie’s efforts certainly paid off. After sitting down for a Q & A with McAdam, it became more and more apparent that the goalie was mature well beyond his eighteen years of age. Not only did McAdam display a solid mentality while splitting duties for the Black Hawks, he provided unconditional support for his teammate Cal Petersen.

McAdam will play his ’13-’14 hockey season with Penn State University and will be facing a new tier of shooters that will undoubtedly help him improve his game in the long run. While the Islanders signed Parker Milner earlier in the day, the selection of McAdam bolsters New York’s depth at the goalie position. Over the next few years, McAdam will likely develop at the collegiate level, but Islanders fans should keep a very close eye on the franchise’s second selection in the 2013 NHL Draft as he could very well develop into a solid goalie in the next several years. 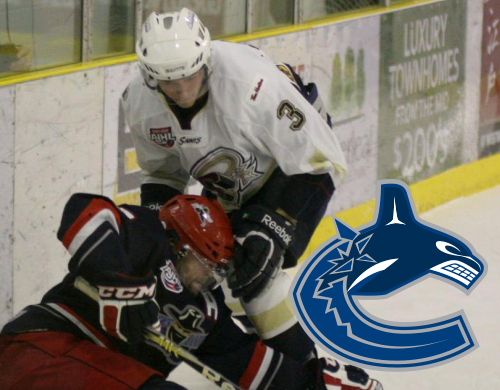 Mike Williamson (6th round, 175th overall by the Canucks)

The Canucks rounded out their busy draft day with three more defensemen: Anton Cederholm, Mike Williamson and Miles Liberati – all of whom fall into the category of longshots who likely need a few years of development before starting their professional careers.

Pass it to Bulis:

With the 175th pick, the Canucks select defenceman Mike Williamson out of the Alberta Junior Hockey League. He’s 6’3″ and headed to Penn State University, which fits Mike Gillis’s strategy of going with players en route to the NCAA with late round picks.

Williamson is also an older player at 19, which also fits Gillis’s strategies over the last few years.

Central Scouting had Williamson ranked 183rd among North American skaters heading into the draft. There’s not a lot of information out there about him, but judging from his size and mediocre point totals, we can assume he’s a stay-at-home type.

Not a lot out there, so I will go with what Pass It To Bulis said about him.

Via Zanstorm: "I would love to be a scout for the Canucks. I would like to have seen this kid play and see the potential that they see in him, because from an outsider's perspective, this looks like a lousy gamble."

This is an off-the charts pick: the Alberta league is not known for its strength, nor is Penn State.

Central Scouting had him rated as 183 among North American skaters; just doing simple arithmetic should tell you he's a reach, but at this point in the draft, it's time to take a reach.

Williamson is a big, tall defenseman who played in the AJHL where he was named to the all-rookie team. He is slated to play in college at Penn State next season. The Canucks have had some luck of late snagging NHL caliber blue liners late in the draft and from programs that aren’t the brightest star on the map. Could Williamson be the next one?
Posted by Kyle Rossi at 4:36 PM