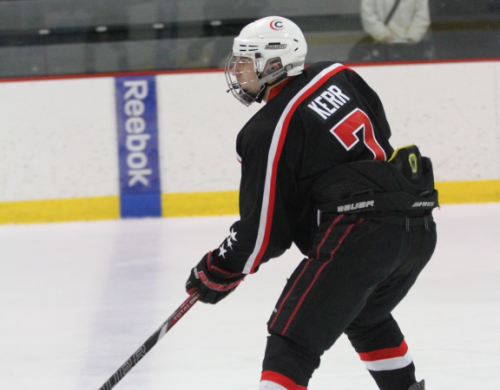 Although he missed out on the big prize at the end - selection to the Ivan Hlinka Memorial Tournament - defense recruit Kevin Kerr completed a very successful six-day turn at the USA Hockey Select 17 Player Development Camp in Williamsville, NY on Wednesday.

As a member of Team Gold, Kerr helped his squad to a 3-2-0-0 (W-L-OTW-OTL) record. A 5-1 win over Columbia Blue opened proceedings up on June 28th, and he assisted on the 1-1 goal with his team on the power play. The next day, he was held off the scoresheet in a 6-2 loss to Kelly Green, but Kerr bounced back to collect the only assists on the 1-0 and 2-1 goals on Sunday against Royal Blue, although Gold went on to lose 5-3. A stop-the-bleeding 5-1 win over Black on Monday saw an unspecified minor penalty by the Bensalem, PA native.

Kerr closed his team's schedule (Gold finished third in their five-team National Division, and only the two division winners advanced to a championship game) by scoring twice against Forest Green on Tuesday, including a late winner in a 5-4 victory. It was an effort that caught the attention of The Hockey News prospect guru Ryan Kennedy.

Kerr's five points in five games tied for tops on Gold, and through the pool stages of the camp (everything but the championship game) he was 18th in scoring among all players and best of the defensemen.

Not surprisingly, he was chosen to participate in the all-star game that closed camp, and his White topped Blue 3-2 in a shootout. The only blemish on the week, as mentioned, is that Kerr was not picked for the Team USA entry to the Ivan Hlinka Memorial Tournament, a roster populated by standouts from Select 17s. The tourney is an international U18 showcase that takes place every August and includes some pretty high-end talent - last year's gold medalists from Canada were paced by Nathan MacKinnon, the first overall pick in the NHL Entry Draft on Sunday.

His reaction to the snub was pretty mature:

One of his Gold teammates, defenseman Mat Harris, felt he was done wrong:

All in all though, not bad for competing against some of the top 1996 birth years out there. While NHL picks are no big deal for Penn State anymore*, look for Kerr to receive heavy consideration for next year's entry draft. It's probably fair to consider him the clubhouse leader to become PSU's fifth overall selection (third while affiliated with the university), although he's certainly not the only Nittany Lion who will be eligible.

The Tri-City Storm, which chose Kerr seventh overall in the 2012 USHL Futures Draft, will be the lucky recipient of his services this fall. Previously, the Team USA selection for the 2012 Youth Olympic Games enjoyed a successful run in the Team Comcast organization and with Holy Ghost Prep.

Next up: Hannah Ehresmann, a goalie scheduled to join the women's team in 2014, and the other Penn State commit set to participate in this year's USA Hockey camps. She will join the other Select U18s in St. Cloud, MN from July 10th through 16th.