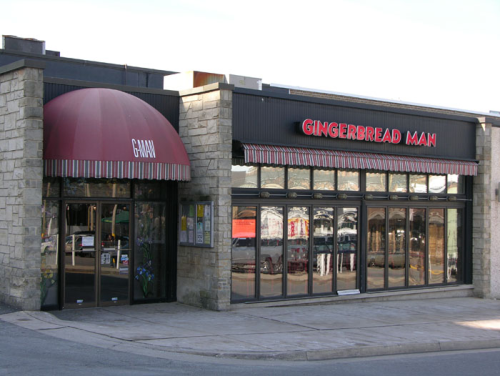 Hockey players Tommy Olczyk, Lindsay Reihl and Kate Christoffersen were among the 68 Penn Staters named Big Ten Distinguished Scholars last week, an honor for student-athletes with a grade point average of 3.7 or higher. What makes it especially impressive is that none of the three have actually played in the Big Ten.

In all seriousness, people like them (and the many other outstanding students on both the men's and women's teams) are why I'm proud to blog about Penn State hockey. Also, #culture.

Last Tuesday evening - July 16th, show number 56 if you're digging at the link - Penn State's own David Glen spent an hour in The Pipeline Show's studio, along with Adam Tambellini, a promising prospect who played in the BCHL last season, and host Guy Flaming. While nothing earth shattering happened, it was nice to get a little more in depth than is typically the case with a recorded one-segment interview. And as you may have expected, Glen showed well enough to demonstrate why he's probably the leading candidate to wear the C after Olczyk graduates. For that alone, it's worth a listen.

By the way, something kind of fantastic: at the beginning of the second segment, both Glen and Tambellini plugged their Twitter accounts, and Flaming followed up by asking the latter how much his follower count blew up after he was picked in the third round by the New York Rangers at the NHL Draft on June 30th. That prompted me to check both of their pages. Tambellini, who is headed to North Dakota, has just under 1,500 followers. Undrafted Glen, who plays at Penn State, is over 2,000.

State College bar Gingerbread Man, generally known as G-Man and for its bro-tastic clientele, had its liquor license abruptly suspended at some point between July 13th and July 16th for reasons unknown. Shortly after the news spread, the following appeared on the establishment's Facebook page (assume a quote-long "[sic]"):


To all my G-man friends Thank you for all your continued support. The G-Man will be closed for the next few weeks. We will open again in early August and we will have NEW Menu, New Management, New Specials, and New ownership in process. We are very excited to bring back the old tradition of the G-man as a great restaurant, that happens to be a great bar! We are extremely excited about the future of the G-man so we hope you will be there to support us as we move forward. Thanks

Since 2009, G-Man has been owned by The Hat Trick Group, Inc., which includes former Icers coach Scott Balboni, current Women's Ice Hockey Club coach Pat Fung (who in the past has also coached the Ice Lions and Lady Icers, while assisting with the Icers) and former Icer Teague Willits-Kelley. However, it appears as if the era of hockey-based bar ownership in town may be coming to a close. 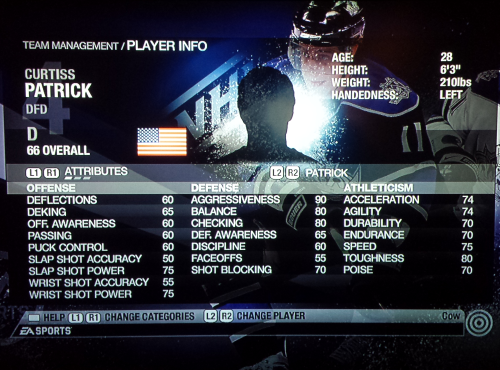 There was a day, not all that long ago, when people persistently suggested that college hockey could or should or might be added to EA's popular NHL series of video games, which presently includes the major-junior CHL, as well as the AHL and professional leagues across Europe. That event now seems further away than ever with the NCAA buried in litigation over the use of player likenesses in EA games covering other sports, namely football and basketball - litigation that has prompted the NCAA to pull out of games subsequent to the just-released NCAA Football 14.

The involved parties will continue to find a way to produce a college football game, as the NCAA's withdrawal is largely symbolic (the rights to the various schools' names, logos, etc. are handled through the Collegiate Licensing Company, not the NCAA). However, the football games make money, while EA has killed both the NCAA March Madness/NCAA Basketball (1998-2010) and the MVP: NCAA Baseball (2006-2007) series that didn't. Given the questionable marginal value of adding college hockey to the NHL game and the current legal climate, it ain't happening anytime soon. It simply wouldn't be lucrative enough to negate the exposure, in my amateur judgment.

Here's a nice 2:41 chunk of a Pegula Ice Arena tour, shot primarily on the floor of the main arena, but also including some of the underneath stuff like the Zamboni area and the dry lockers.

The conference built to grab a massive television payday will have all of 18 games on CBS Sports Network, which is sort of like NBC Sports Network, Fox Sports 1 and ESPN, just without the viewers, sponsors, carriage or high-end programming. Well done, boys.

Of interest: on November 15th, CBS Sports will carry a doubleheader involving both Wisconsin (at Miami) and Michigan (at Nebraska-Omaha), if you're the sort of person who likes to scout future Penn State opponents. I'm guessing that if you read hockey blogs in July, you probably are.

NCHC school Western Michigan is rumored to be - there is no way I'm going with "reportedly" on this source - building a new arena. It is rumored to cost $16 million. Have fun with that, I guess. 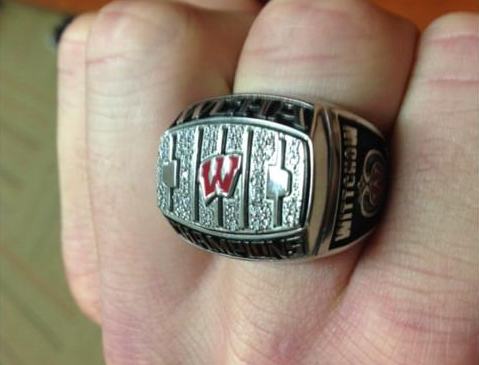 Due to declining ticket sales, Wisconsin sold sponsorship of its 2013 WCHA playoff championship rings to Chevrolet.

It was a busy week for Lindenwood's media relations people. Penn State's CHA rival added an assistant coach on Thursday, former Robert Morris Colonial Samantha Ullrich, who most recently was on the staff of Team Pittsburgh's U19 AAA squad that won the 2010 USA Hockey national championship. Two days before introducing Ullrich, LU announced its eleven-player freshman class for the coming season. Like PSU, the Lions have gone in hard on Minnesota high school players, grabbing three this time around - including Nicole Rash, a teammate of Nittany Lions freshman Sarah Nielsen at Edina.

No NHL for now, but could UW hockey thrive in Seattle?
(Seattle Post-Intelligencer)

Never forget where you came from, Penn State.

My thoughts on west coast NCAA hockey haven't really changed in the last couple years. It could be a big deal. A really big deal. As I say that I'm looking at Washington, the subject here, located in a major city that, by all accounts, loves hockey and includes what seems like a workable short-term arena solution (as we know, that's kind of important). And also at schools like Arizona and Arizona State, home to two of the ACHA's best-run and best-supported programs. Of course, there's also the rapidly-growing California hockey scene, touching on a bunch of other Pac-12 universities.

The biggest problem is that somebody has to be first, and that's not such an appealing position as a geographic outlier that runs the risk of getting Huntsvilled. Seriously, which conference takes an unproven startup program nowhere close to any existing program, and one that is more or less guaranteed to leave when its primary conference can get to six? The WCHA, which many think is already overextended based on its new place in the universe? The NCHC, which was formed when a few power schools ditched long-standing rivals that were perceived as bad for the bottom line? Once the ball gets rolling, there's no stopping it. But right now, it's hard to see who can push the thing forcefully enough. 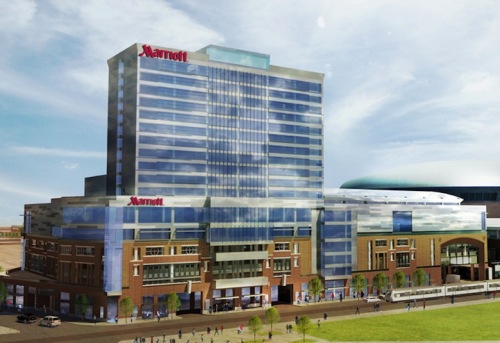 From the "it's not what you know, it's who you know" department: HARBORcenter, Terry Pegula's rink, hotel, retail and restaurant complex in downtown Buffalo, has contracted with Shaner Hotels to operate a Marriott at the facility. Shaner, for those who don't know, operates 36 hotels in 14 states (plus another in Italy) and is headquartered in State College. Oh yeah, and they sponsor Penn State hockey. It's not terribly difficult to put those dots together.

Canisius - which presently calls the campus rink of Division III Buffalo State "home" - has been in negotiations to play at HARBORcenter once it opens in 2015. Additionally, the twin rinks that will also be connected to the Sabres' First Niagara Center should be an appealing option for major tournaments.

I don't really like the word "hazing," because people who engage in it don't really deserve a softened version of "being a douchebag who is guilty of assault." Whatever you want to call it, it's alleged to have happened with Upper St. Clair High School's hockey team. Suck less, guys.

How To Do A Bieber Fangirl Story: Ask About The Eagles’ QB Dilemma
(Deadspin)

The Women's Ice Hockey Club's Allie Rothman, in the course of her internship at Comcast SportsNet Philadelphia this summer, edited a video featuring CSN's Sarah Baicker asking fans outside of a Justin Bieber concert last Wednesday about the Eagles' quarterback situation and about the Beebs-Blackhawks locker room story. It's about as fantastic as you'd expect, and as a result, it ended up on Deadspin. Rothman reacted by tweeting that "I don't know whether to be proud or horrified" of the notoriety. Proud, Alexandra. Definitely proud. Rule of thumb: if you're involved in something that ends up on Deadspin and it's not there because of you being an idiot in some way, soak in the viewership and enjoy.

In a move that affects two separate Nittany Lions opponents, junior defenseman Blake Doerring is transferring from Vermont to Ohio State. He only played four games last season due to injury (after 29 as a freshman), so it's tough to call this one paradigm shifting, although the Buckeyes will benefit from having a sturdy stay-at-home guy when he's eligible to play at OSU in 2014-2015.

The Catamounts also lost junior forward Mike Montagna to Division III Oswego this offseason. Montagna only played in 11 games for UVM last year, but one of them was the Philadelphia College Hockey Faceoff against PSU - he was a -2 with one shot on goal in the contest. 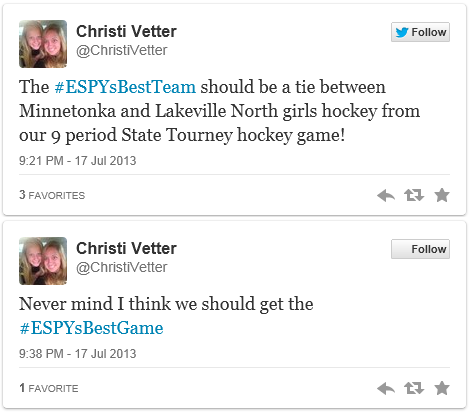 An easy call for best tweet(s) of the week: 2014 women's commit Christi Vetter, during the ESPYs last Wednesday evening. I sincerely feel bad for anyone who missed Vetter's Lakeville North fall 4-3 in six overtimes to Minnetonka in February's Minnesota AA state semifinal. Despite the loss, Vetter may have been the best player on the ice, as she willed the Panthers back from a 3-1 deficit with a pair of second-period goals to force (lots of) extra hockey. Of course, PSU freshmen Laura Bowman and Amy Petersen weren't exactly terrible either, with the former assisting the latter on the game-winner after each had an assist in regulation.
Posted by Kyle Rossi at 12:47 AM