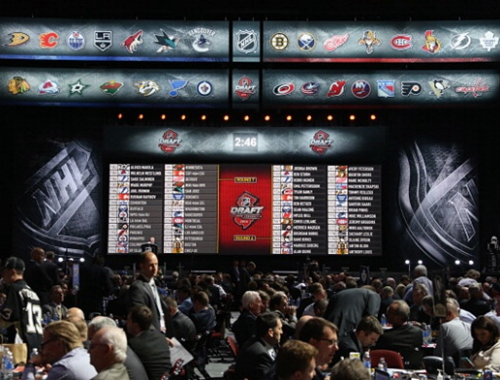 What has two thumbs and got to hang with Terry Pegula in the Sabres' suite during the NHL Entry Draft? Joe Battista! That one doesn't really work in the third person and in writing, does it?

Anyway, here is JoeBa's perspective on the day, as well as a few words about the schedule, ticketing (we're up to 4,100 season ticket deposits as seat selection is set to get underway in just over a week) and things like that.

OTB editor Jasper Kozak-Miller, trust me, knows his stuff. So when he has a generally positive opinion of Penn State's recruiting for this season and beyond, you should probably listen to him. And his sources. Especially his sources.

Ready for this beast of a Three Stars entry? You better be.

Penn State held a media event last Tuesday to give the local press the material to pump out some coverage of PSU's NHL draft picks. Eamon McAdam was there, as was assistant coach Keith Fisher, while Mike Williamson spoke via telephone from his home in Leduc, AB.

The leading link is a video interview with McAdam conducted by Penn State Athletic Communications that day. And precisely as they planned, a wave of stories from most of the usual suspects followed shortly after.

Since we're already here, let's use the opportunity to clean up a few things I've seen on the draft picks not covered elsewhere.

First, a couple of Penn State blogs and their "general" draft posts:

In the specific-to-McAdam department, we have:

Williamson has really received the short end of the stick so far, in terms of media coverage - it's staggering how much less attention one gets simply by not showing up at the draft. No glam shots, no video interview on Canucks.com, no quotes in outside articles, etc. He can hardly be blamed for not flying most of the way across North America when he wasn't the near-lock McAdam was to be chosen, but regardless, it would be nice to see a bit more on him. Here are the two things I did find:

It's disappointing how formulaic a lot of these reviews of draft picks are, even for some of the top players... check the league, check the goals and assists, check the measurements, render a superficial judgment concerning player type, ability and ceiling. I promise that nobody who has actually seen Williamson play, and I watched several of the Spruce Grove Saints' playoff games in the spring, is calling him an "off-the-board" selection (or worse, in other places). I'll concede that he's a project in terms of pro potential - and let's be honest, everyone outside of the first half of the first round is to some degree - but he won't be a wasted pick.


Tim Thomas: From The Bunker To Barclays?
(The Hockey Writers)

Okay, we're not quite done playing out the NHL string yet, sorry about that. Hey, it was overwhelmingly the biggest thing this week, what do you want from me?

Although McAdam is a few years out from plying his trade in Uniondale Brooklyn, I can't help but be riveted by the Islanders' current goaltending situation. It wasn't a terrible week to feel that way either, because it's been a ride.

First, Rick DiPietro, the former Boston University star and top overall pick in the 2000 draft, was finally bought out of his contract by the team, ending an excruciating 13-year saga that made history for mostly the wrong reasons (his groundbreaking-at-the-time 15-year deal signed in 2006, and his freakishly long list of injuries that made the contract a point of ridicule chief among those). That left the team, temporarily, without a certified NHL goalie - Evgeni Nabokov, the primary guy last season, and Tim Thomas, who the team acquired in February despite the fact that he was in the middle of sitting out the 2012-2013 season, were both unrestricted free agents. Kevin Poulin and Anders Nilsson are well regarded and on call, but the two have played a combined 25 NHL games.

Thomas complicated things by kicking the tires on a possible comeback just before free agency opened up on Friday. The two-time Vezina Trophy winner is of questionable value (he's 39 and just took a year off, after all) and likely with no loyalty to the Islanders, as he never played a home game in Nassau Veterans Memorial Coliseum. But... hey, you never know. GM Garth Snow, though, passed on waiting for Thomas and instead signed Nabokov to a one-year contract. So the Isles will have a goalie for the coming season, although things are hardly settled for the long term.

No Penn Staters are mentioned by name in this ranking of each NHL team's prospect group current through the just-completed draft, but for what it's worth, the Islanders are 2nd, Washington is 11th, Vancouver is 20th, and St. Louis is dead last in 30th. Is this a case where it's good, for our purposes, to be bad? Does Max Gardiner have some advantage that McAdam doesn't? Eh... play well and those things tend to take care of themselves.

Quick note: You're not alone, the title confuses me too. Author Corey Pronman considers all 30 NHL teams, and while he doesn't name more than ten pipeliners in any one entry (that would be kind of obnoxious, given the length of each blurb), it seems clear to me that he's judging the entire developmental pool of each organization.

If nothing else, in the last week I learned this week that I'm glad I'm not an NHL blogger - they have roughly 30 times more stuff to read to keep up on things than I do. Let's transition back to college stuff through the common interest of the draft.

The National Team Development Program's J.T. Compher, headed for Michigan in the fall, became the first NHL draft pick for the Big Ten, as the Buffalo Sabres scooped him up with the 35th overall pick.

Also of note: thirteen Big Ten players were selected in all. The Wolverines led with five, Minnesota had four, while PSU and Wisconsin both checked in with two. Yep, second-year NCAA program Penn State did as well as Michigan State, Ohio State (both were skunked, if you're not so good with math) and Wisconsin put together. I don't hate it.

Then again, was Compher actually the first Big Ten player picked, or does that remain on the table for next year? Technically, Michigan was still a member of the CCHA (and Penn State was technically still an independent) on June 30th, the date of the draft.

Midnight on July 1st is the magic time each year when NCAA conference changes across the board become official. But don't worry, nothing happened prior to that to turn the Big Ten hockey tattoo you got the day after the national championship game into a terrible idea.

So officially: Welcome to college hockey, Big Ten! And rest in peace CCHA, I was always a fan and will forever be grateful for the slightly damaged Danny DeKeyser all-conference award I purchased while you were cleaning out the offices.

If you've been in the basement since February, Mary Clarke has you covered with a rundown of the offseason for the men's team so far.

I'm an unapologetic Emily Laurenzi fan, so it's great to see her get a quick look in the papers near her hometown.

With most photo updates of late focusing on the PIA interior after the exterior stopped looking drastically different all the time, it's nice to step back outside to see that the thing is done enough for trees to have been planted around the perimeter.

Know what nobody thought to do until now? Take PIA photos at night with the main lobby lit up. And put them in a video with the beginning of Aerosmith's Dream On playing. Add people and you pretty much have game night.

Now that Pegula Ice Arena is about to open, it doesn't really matter that Penn State could have already been playing NCAA hockey for about 15 years, had ice capability not been cut from the Bryce Jordan Center during its construction. But what if...

The case of UNO, which drew 7,233 fans per game in the 16,680-seat CenturyLink Center last season, seems pretty well on point in that department. The Mavericks started up in 1997 (just after the BJC's completion), and following six years in the multi-purpose Omaha Civic Auditorium - a venue perhaps most famous for Lloyd Bentsen's "Senator, you're no Jack Kennedy" blast in 1988 - moved into their larger multi-purpose current home. And for almost that entire time, they've still been pushing for their own hockey-only facility sort of like the one about to fire up on University Drive.

In our alternate reality where PSU plays at the Jordan Center, does the whole $102 million donation thing even happen, when it wouldn't be needed for varsity hockey? Hey, sometimes things work out for the best.

Anyway, back to the point, things are inching forward in Omaha as the cash-strapped city is still in for $6 million of site improvements in anticipation of the proposed $76 million arena.

If Las Vegas actually cared about the NCHC, I'm guessing that the odds on new commissioner Josh Fenton outlasting his predecessor would be pretty good. Said predecessor, Jim Scherr, was on the job for all of 18 months and left to become the chief operating officer of the 2015 European Games prior to the NCHC playing any games (or, technically and as noted above, having any teams).
Posted by Kyle Rossi at 1:56 AM