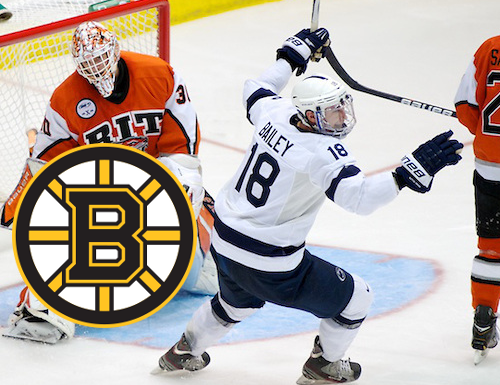 Development camps, as the title implies, can widely vary in their nature, but on a general level are a way for teams to get their prospects under one roof for a few days of instruction. The bulk of teams' camp rosters are made up of their recent draft picks - both Eamon McAdam and Mike Williamson will be attending the camps for the teams that selected them on Sunday - with undrafted players who hope to receive NHL-caliber coaching and maybe make an impression (like Bailey) sprinkled in.

Here's what the Bruins' release said about Bailey:


Casey Bailey is a 6’3”, 195-pound forward from Anchorage, AK, who skated last season for Pennsylvania State University, tallying 14-13=27 totals in 27 games for the Nittany Lions. The 21-year-old ranked second on the team in goals and assists. Prior to joining PSU, the forward appeared in 60 games for the Omaha Lancers of the United States Hockey League, where he notched 27 goals (led the team) and 33 assists (second on the team) for 60 points (second on the team) with 83 penalty minutes (led the team). In four playoff games with the Lancers, Bailey scored two goals and two assists.

Bailey turned out to be one of the stars of the 2012 recruitng class during his freshman season last year, as he's a high-skill player (with a ridiculous shot release, to name one skill) but is also a big guy who is willing to go to the dirty areas. He's certainly a guy who has the potential to sign a professional contract at the conclusion of his college career, whether with the Bruins organization or elsewhere.

Here is the camp's precise location and tentative schedule:

What: The first group of Bruins prospects will lead an on-ice clinic with players from the New England Future Stars Squirt and PeeWee teams. The skate will take place at Burlington Ice Palace, courtesy of FMC Ice Sports. The prospects will assist with on-ice drills and provide autographs for all participants. New England Future Stars combines game play with weekly skill sessions to enhance a players' skill, skating and intellect by creating an environment that fosters each player's development.
Where: Burlington Ice Palace, 33 Ray Avenue, Burlington, MA
When: Friday, July 12, from 3:30 p.m.-5:30 p.m.

What: To kick-off the Boston Bruins Summer Reading Program “When You Read, You Score” a group of Bruins prospects will be at the Nevins Memorial Library. The prospects will be joined by local children and will do an arts and crafts project, an outdoor physical activity and sign autographs.
Where: Nevins Memorial Library, 305 Broadway,  Methuen, MA
When: Friday, July 12, from 3:30 p.m.-5:30 p.m.

What: The final group of Bruins prospects will participate in a Summer Field Day with campers from the Boys & Girls Club of Greater Billerica. The prospects and campers will form teams and compete in a variety of Summer Field Day activities including Hula Hoop Marathon, Egg Toss, Beach Ball Race, Ring Toss and Potato Sack Race. After the field day the prospects will sign autographs for the campers in attendance.
Where: Boys & Girls Club of Greater Billerica, 19 Campbell Road, Billerica, MA
When: Friday, July 12, from 3:30 p.m.-5:30 p.m.