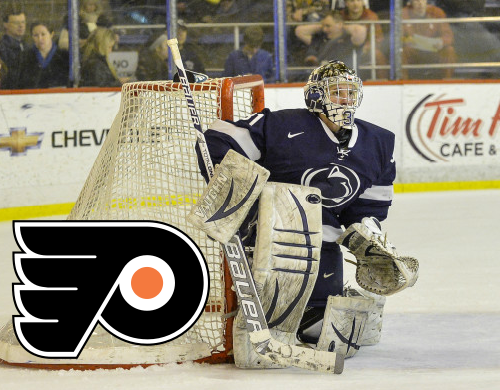 Skoff joins Casey Bailey, who was invited to Boston Bruins camp, as a Penn Stater invited to a development camp this summer as a free agent. Tommy Olczyk and David Thompson attended the camps of the Hurricanes and Flyers, respectively, last summer.

The announcement is pretty brief beyond the roster itself, so let's work the entire thing in here:


The Philadelphia Flyers today announced their 31-player roster for their 2013 Development Camp, which begins on Monday, July 8 at The Virtua Center Flyers Skate Zone in Voorhees, NJ.

On Wednesday, July 10, the camp will shift to Stone Harbor, NJ for the annual Trial On The Isle, a day of conditioning and team activities that begins on the 96th St. beach at 9 AM. The day includes a team autograph signing for fans at Stone Harbor Elementary School from 1:15 to 2:45 and a beach volleyball tournament among the players that fans can watch beginning at 3pm.

If you're a Penn Stater in the Jerseydelphia area, I'd encourage you to attend, as it seems like a good time and an opportunity to get closer to things than is normally the case.

And, of course, you would get to support Skoff. The former Sioux City Musketeer and one-time Ohio State signee was a huge part of the Nittany Lions' surprising level of competitiveness as a first-year NCAA program in 2012-2013. After an early rotation with P.J. Musico, he finished the campaign as PSU's starter and with robust stats: a 9-8-0 record, a 2.48 goals against average and a 0.921 save percentage. He was at his best in the team's big wins, including 36 saves against Ohio State, 34 against Vermont and 42 against Wisconsin.
Posted by Kyle Rossi at 5:02 PM