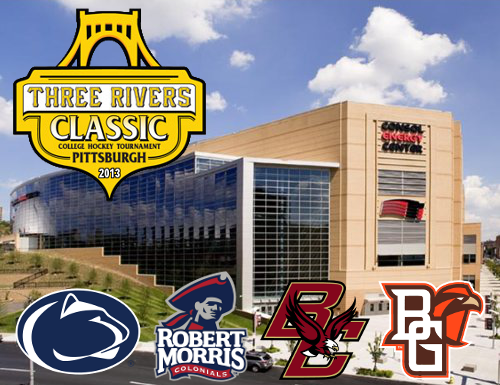 For the second straight season, and as verified by the websites of both Robert Morris and Bowling Green, Penn State will open the 2013 Three Rivers Classic at Pittsburgh's Consol Energy Center against RMU. The Nittany Lions and Colonials will play on Friday, December 27th at 7:35 p.m., a game preceded by Boston College versus Bowling Green at 4:35 p.m. Saturday, December 28th will see the losers of the two Friday contests square off for third place at 4:35 p.m., with the championship game at 7:35 p.m.

The return of the holiday tournament, its dates and participating teams were all confirmed a long time ago, of course. However, the scheduling specifics had, until recently, remained unknown.

That Penn State is guaranteed to play Robert Morris is rather unsurprising, as it is part of a continuing push to cultivate a rivalry between two of Pennsylvania's three NCAA Division I programs. To this point, RMU has the upper hand in the series, thanks to their 3-2 triumph at the Ice Pavilion on December 15th of last season, followed two weeks later by a 6-0 whitewashing at the inaugural Three Rivers Classic. There was, however, redemption for PSU on the second day of the showcase - a 5-4 victory over Ohio State in the third-place game, a signature moment of the blue and white's inaugural NCAA season.

In the championship game, the Colonials eked out a 1-0 win over perennial power Miami to take the title and RMU goalie Eric Levine completed an unreal weekend of back-to-back shutouts involving a total of 99 saves to render the tournament MVP award academic. Beyond Levine and his team, the Three Rivers Classic was also noted for its attendance, as 22,460 tickets were sold over the two days.

Two of the Nittany Lions' three opponents at the 2013 Classic appear elsewhere on the schedule as well. PSU will travel to RMU on Friday, November 1st, while Boston College is slated to visit Pegula Ice Arena on Saturday, January 25th.
Posted by Kyle Rossi at 2:08 AM