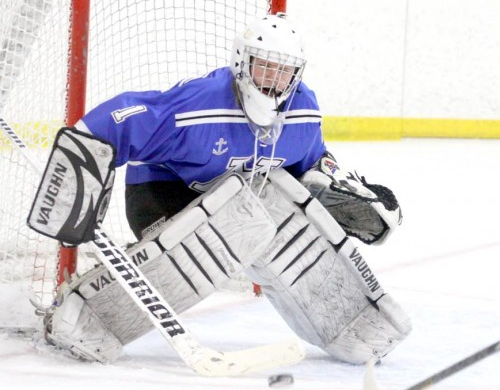 Hannah Ehresmann, a goalie scheduled to join the Nittany Lions in 2014, completed a week at the USA Hockey Select U18 Player Development Camp in St. Cloud, MN on Tuesday. The senior at Minnetonka (MN) High School helped her Team Pink to a 1-2-0 record while splitting crease duties with three-time national development camp selection Selena Hunter.

Her only rough patch came in Pink's opener, a 3-0 loss to Purple on July 12th that saw Ehresmann allow all three goals over the second half of the game. She bounced back quite well - in fact, as well as possible - by not allowing a puck past her during the rest of her time in St. Cloud. On July 13th, she posted 23 minutes of a shutout despite her team dropping the contest against Royal, 2-0. Pink closed out its schedule with a win, 3-1 over Black on Monday, as Ehresmann chipped in another half of perfect goaltending.

She was judged to be among the top eight of the 20 goalies at the camp and filled one of the spots available for the position on the four all-star teams that played each other on Tuesday. Despite the bump up in competition, she managed to extend her shutout streak to 70:32, although a Kyra Smith-allowed goal caused her Team Blue to lose to Team White, 1-0.

In all, Ehresmann closed things out with a 1.50 goals against average against some of the top players in the nation in her age category, while also receiving plenty of on- and off-ice instruction - obviously a heavy emphasis at a camp that only involved four full games over seven days. Not too shabby.

In 2013-2014, she is projected to take over as the number one option between the pipes at Minnetonka. The Skippers have won three consecutive Minnesota Class AA state titles, thanks in large part to her efforts in relief of Sydney Rossman on the last two of those teams, as well as those of current Penn State freshmen Amy Petersen and Laura Bowman on all three.
Posted by Kyle Rossi at 12:39 AM