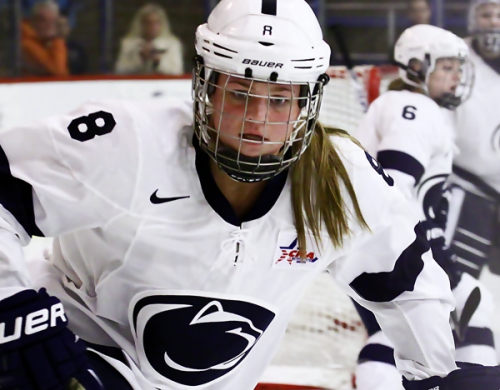 What was well known in Penn State and women's hockey circles for quite some time is finally official - former Nittany Lions defender Taylor McGee is headed to Worcester, MA and the College of the Holy Cross for the coming season, the school announced Friday.

McGee, who joined University of British Columbia-bound Katie Zinn in transferring out of the Penn State program this off-season, played 23 games as a freshman in 2012-2013 and put up a pair of assists. When healthy, the Pearl River, NY native and former captain at Taft School was an outstanding puck mover with good offensive instincts from the blue line. Her highlight as a Nittany Lion was probably the opening weekend of the season (and of the NCAA era), as she and defense partner Paige Jahnke were each a +3 in the historic 5-3 win at Vermont on October 6, 2012. The duo followed up with +1 ratings and one of McGee's assists in defeat the next day.

Holy Cross, which plays at the NCAA Division III level for women's hockey, is perhaps best known to PSU as the alma mater of assistant coach Casey McCullion. The 2007 graduate's name still dots the Crusaders' goaltending record books, as she's second in program history for career saves, third for wins, fifth for save percentage and fourth for goals against average, and also owns several top ten single-season marks in those categories. Overall, Holy Cross is 198-130-25 in 14 seasons of play and captured the 2009 ECAC East regular season championship. Head coach Peter Van Buskirk has posted winning records for seven years running, dating back to McCullion's senior year, after the program enjoyed just one winning campaign in its first seven.

Here is the body of the press release covering McGee and the six other members of her recruiting class...

"We are very excited to have these players attend Holy Cross and be part of the women's hockey program," Van Buskirk said. "They all have good skills but more importantly they are all team players with great work ethic."

...and finally, here's the standard-issue quote from Van Buskirk regarding McGee, who will wear number 28 for the Crusaders:


"Coming from Penn State we expect great things from Taylor. We anticipate she will help stable our defensive core and contribute offensively. We see her as an offensive defenseman with great decision making skills, strong on the puck and a good shot."