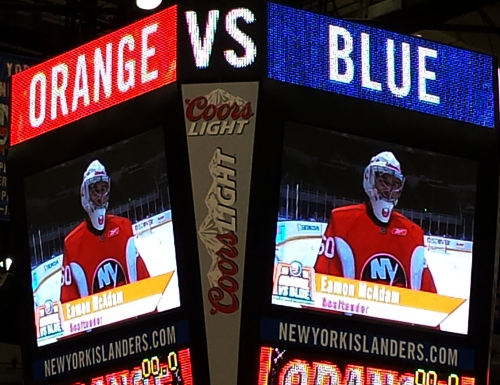 Eamon McAdam stopped 28 of the 33 shots he faced, but took the loss as his Orange Team fell 6-2 to the Blue Team in the Orange vs. Blue Scrimmage on Thursday evening, the centerpiece of the New York Islanders' prospect mini-camp this week.

McAdam was dented on the first shot he faced, 4:23 into the contest, when Blue's Ryan Strome won a puck battle at the line off of a stretch pass and chased it down in the corner. The fifth overall pick in the 2011 NHL Draft then found a trailing Joey Diamond, and the former Maine Black Bear ripped it home from high between the circles.

Following the early goal - which turned out to be the only one of the 25-minute first half by either team - McAdam locked in and played his best hockey of the scrimmage to keep Orange in the game. A few highlights:
Team Blue's goalie for the opening half was Kenny Reiter, the Pittsburgh-native backstop for the 2011 national championship team at Minnesota-Duluth. In the second half, McAdam stayed in, but Reiter gave way to Joel Rumpel. If the latter name rings a bell, it's probably because Rumpel just finished his sophomore year at Wisconsin and shut out Penn State on February 24th - so it may not be the last time he and McAdam are at opposite ends of the same ice surface.

Unfortunately, Rumpel won the battle this time around, starting with Clark scoring a soft goal just one minute into the half. The play began with a Strome stick lift on Orange defenseman Marc Cantin, who was attempting to exit the zone, then ended with Clark firing through McAdam from the faceoff dot to the goalie's left.

After Victor Crus Rydberg closed Orange's deficit to 2-1, Strome pushed the score back to 3-1 with 13:45 left when he buried an easy rebound from the bottom of the left circle after a great play by Diamond that saw the Long Island native swing behind the net from left to right, then spin and dangle his way to the front for an initial attempt that forced McAdam down. Colton Beck made it 3-2 through a penalty shot conversion with 5:05 left, but the comeback was stifled 28 seconds later when Wetmore scored off the rush. McAdam did manage the initial save, but was victimized by a bouncing rebound that appeared to deflect in off of Clark, although the goal was given to Wetmore.

Clark, a former Badger, got even with karma on a penalty shot with 1:51 left that involved some deft stickwork and outwaiting McAdam, and UMass-Lowell alumnus Wetmore closed the scoring with an empty netter.

Following the 50-minute scrimmage, the prospects engaged in a skills competition that also counted towards the point totals for the event. Orange, thanks largely to McAdam, took all three skills contests, but it wasn't enough to eliminate the four-goal hole from the scrimmage, allowing Blue to escape with a 7-6 overall win.

First up was a five-man shootout. Quine, Blue's first shooter, scored with a brilliant move that involved fading to the left side, working the puck between his skates and stick, then leaving it behind and reaching back over the goalie to tap it in (the Forsberg, if you're familiar). McAdam, though, bounced back and didn't allow one past him the rest of the way, poking away from Persson, saving Sundstrom and Diamond, and surviving Strome's errant attempt at flipping the puck in the air and applying a baseball swing. On the other end, Crus Rydberg and Brock Nelson burned Rumpel to give Orange the 2-1 win to trim Blue's lead to 7-4.

With the goalies sitting out of the hardest shot competition, Orange's Mike Dalhuisen, who just finished his career at Quinnipiac, fired two 97 mile-per-hour smokers to win it and give his team another point.

The final event was a team breakaway relay, a race to score seven pucks placed at each blue line, which included a requirement that each attempt be carried back to the line before the next shooter began. McAdam got off to a rough start in allowing goals to Wetmore and Persson in Blue's first three tries, but then locked the door in a major way with eleven straight stops (Matt Tabrum, Cason Hohmann, Steve Alonge, Ben Rosen, Peden, Trevor Moore, Sundstrom, Diamond, Strome, Jesse Graham and Loic Leduc) to allow Orange to pull ahead and eventually win. Even after Jared Hauf finally broke through for Blue, McAdam denied four of the last five shooters as Orange took a bit longer than they probably should have to clinch the point.

All in all, it was probably a better evening for McAdam than the credit he'll receive, particularly given that as a draft pick this year, he was among the youngest players on the ice and competing against selections from two and three years ago who have already established themselves as AHL players (not to mention a guy like Strome, who many think will play in the NHL this year - he sure looked ready to me). Sure, there were issues, as he still seems to struggle with longer shots and occasionally higher ones, while also sometimes overcommitting, but all in all, I took a positive feeling away from the event. Supporting that view: his athleticism that was fully on display with a diving stop on an attempt at the empty net as he was trying to leave the ice with 2:05 left, drawing a healthy cheer from the crowd of 5,200. Other plusses, in my amateur judgment, were his ability to read plays and his well-documented prowess on low shots. He also showed mental toughness in bouncing back from some of his worst moments with some of his best ones. Finally (and whether you like it or not, it's important in this day and age), McAdam proved that he's an outstanding shootout goalie.

Of course, all of that pales in comparison to the fact that a Penn Stater took the ice against the top prospects in what was recently called the second-best pipeline in the NHL and did quite well for himself on balance.

Here are a few more photos - be nice, they were taken with a cell phone camera. 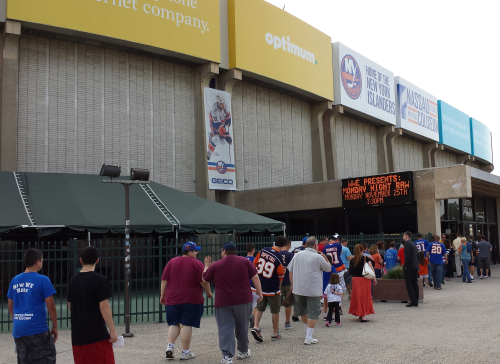 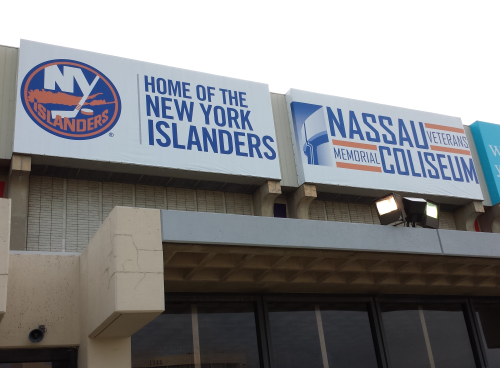 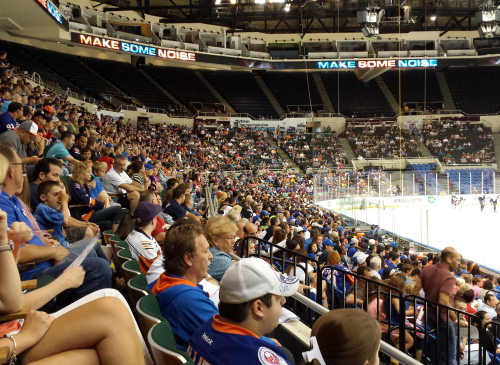 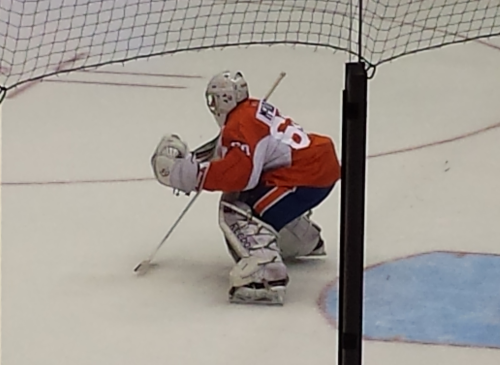 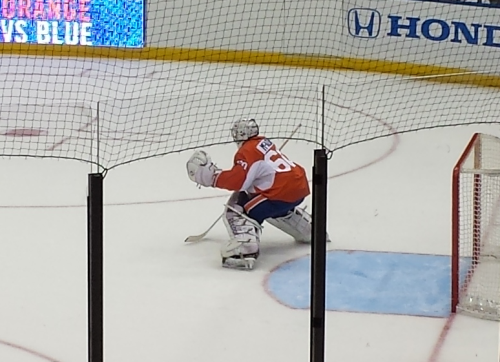 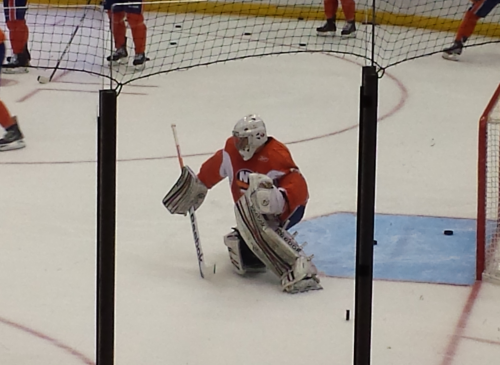 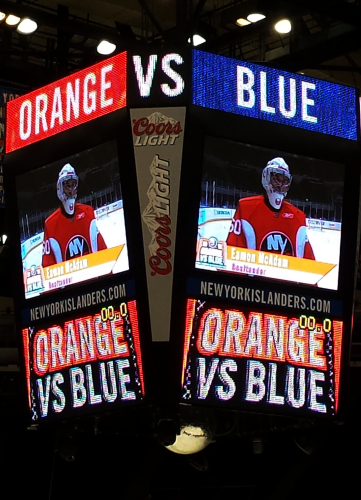