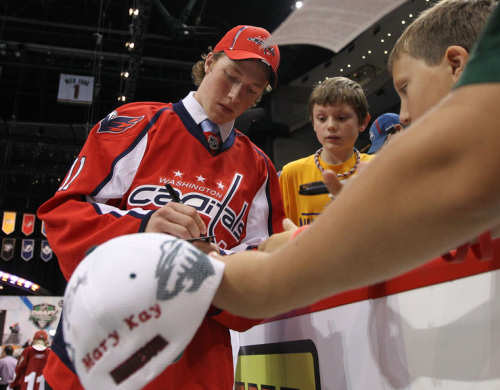 Junior defenseman Patrick Koudys will attend the Washington Capitals Development Camp July 8th through 13th at the Kettler Capitals Iceplex in Arlington, VA, according to a team release.

Koudys' invitation was expected as he was a 2011 draft choice of the Caps, and on- and off-ice instruction of a team's prospects is, by and large, why these camps exist. He joins Casey Bailey (Bruins) and Matt Skoff (Flyers), who were both announced as free agent invites to camps on Wednesday. Eamon McAdam (Islanders) and Mike Williamson (Canucks) have also confirmed that they will attend the camps of the teams that drafted them on Sunday.


D (51) – Patrick Koudys – Drafted by WSH in the fifth round (147th overall) of the 2011 NHL Draft Koudys posted one goal and 14 assists in 64 games in his first season with Muskegon of the USHL. His 95 penalty minutes ranked second on the team. He plans to attend Penn State University in the fall.

More thoroughly, Koudys was playing in Muskegon to cover his NCAA-required sit-out year after transferring from RPI, where he played 58 games from 2010-2012 - including on the Engineers' NCAA Tournament team in 2011. Prior to his two collegiate seasons, the stay-at-home defenseman played for the Burlington Cougars of the OJHL in 2009-2010, where he teamed up with Nittany Lions sophomore Luke Juha. Koudys will have two years of eligibility remaining to use at Penn State.

As with the Flyers and Bruins camps, on-ice sessions are open to the public. Here's the schedule of events, with all times subject to change. It has not yet been specified whether Koudys will play for Team White or Team Red.