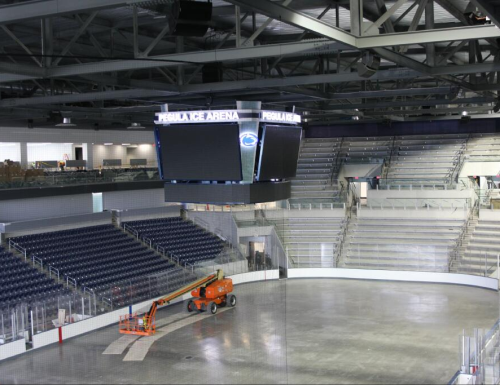 In addition to the headlining $50,000 for the Smeal College of Business' Rogers Family Trading Room, former Icer Bill Mayer along with his wife Cynthia (both 1985 graduates), recently donated $12,500 to the men's hockey program.

Both Bill and Cynthia were multi-sport athletes at PSU - the former was on the varsity lacrosse team in addition to hockey, while the latter played field hockey and softball.

Freshman defenseman Mike Williamson dropped by the studios of radio station CJLD in his hometown of Leduc, AB for a great interview primarily discussing the NHL Draft and Canucks Development Camp (which was still ahead of him at the time), but also touching on his future at Penn State and his past in Spruce Grove.

Possibly the only thing wrong with it: after Williamson cited fellow Spruce Grove Saints-to-Nittany Lions Dylan Richard and David Glen as people who will help his transition to college, the interviewer threw in Reed Linaker as another former AJHLer on the roster. Whoops.

1. TAKE A LOOK! An Updated, Inside Look at Pegula Arena
(WTAJ)

First, I'd like to get a quick beef out of the way with Penn State media: I wish they'd be more engaged in hockey. It seems like every story outside of a couple outlets (the Collegian immediately comes to mind as an exception) is either a) something the athletic department handed out or b) an OMG ARENA! hit, which is about the easiest thing in the world to crank out if you need to fill a couple minutes. It would be nice to see someone get a bit proactive, as Onward State recently did when they smoked everyone on the PSU football in Ireland story. Where's that initiative for hockey?

WTAJ is the one local TV station that has been, for the most part, on top of hockey throughout, so they deserve credit for that. And this story with "an updated, inside look" at Pegula Ice Arena is well done, although I expected more behind-the-scenes stuff and not just shots of the seating bowl and main lobby until the last ten seconds.

Also... "As steep as code allows." Finish your drink!

A nice look at the highly-successful and aforementioned Spruce Grove Saints program that has produced current Nittany Lions Williamson, Richard and Glen, and also had two players selected in the NHL Entry Draft last month (Williamson and defense partner Carson Soucy, taken by the Minnesota Wild in the fifth round).

Former Icers goaltender Geoff Beauparlant (a 2002 graduate) has continued his ascension in the coaching world with his hiring as the new head coach of the NAHL's Kenai River Brown Bears in Soldotna, AK. Since 2010, he had been an assistant with the league's Fairbanks franchise.

Beauparlant was 27-2-1 during his college playing career, primarily as a backup to John Sixt, Mark Scally and Scott Graham, and won ACHA National Titles in 2000, 2001 and 2002.

While recruit Kevin Kerr recently missed out on selection for the U.S. Under-18 squad for the Ivan Hlinka Memorial Tournament next month, it's at least possible that PSU ends up with someone from the team anyway - bruising Eagan (MN) High School defenseman Nick Wolff.


Wolff hopes to play college hockey sometime down the road and has already taken unofficial visits to Miami (Ohio), Ohio State and Penn State. But his plans for now call for first staying at home and finishing high school with his family and friends.

Some junior hockey after high school seems likely for Wolff. He will be eligible for the 2014 NHL draft next June.

Because of his size, work ethic, rapid development and recent exposure, Taylor believes Wolff will garner 'a ton' of Division I interest this season.

Here's a densely-packed look at how collegians nationally fared in the NHL Entry Draft, including a paragraph's worth of a nod to the history made at Penn State.

College hockey's draft presence took a big hit when Michigan State Cornell Western Michigan commit Michael McCarron, the only potential NCAA player selected in the first round, decided to pass on school and go pro. The National Team Development Program product signed an entry-level contract with the Montreal Canadiens and will play for the Ontario Hockey League's London Knights this season.

Bad news came in twos for WMU, as the day after losing McCarron, the Broncos dumped junior defenseman Garrett Haar from the program. Head coach Andy Murray, who had already placed Haar on suspension for the fall semester due to academics, explained...


“First of all, I want to say we tried real hard with Garrett to help him,” Murray said. “We gave him every bit of academic assistance we could, including having people walk him to class, tutors and everything we could do, but you have to be committed to it and unfortunately he wasn’t.

“There were issues of integrity between the coaches and his teammates that were not at an acceptable level.”

Ouch. Haar claimed, via Twitter and included in the link above, that leaving was his decision. His comment preceded Murray's statement, so I'm guessing that he was taking a chance at saving face while assuming, incorrectly, that the school would remain silent on the story. He's apparently not the brightest guy in the world, so those things will happen.

Incidentally, Haar was a 2011 seventh-round draft pick of the Washington Capitals and was at the team's development camp with PSU's Patrick Koudys while all of this was going down.

We already know about the Penn State Five, but who else represented college hockey in an NHL development camp this summer? Unofficially, Michigan led the Big Ten with 15 players, followed by Minnesota (14), Wisconsin (12), Ohio State (10) and Michigan State (8). Don't panic over the difference between their numbers and ours - the list includes alumni, and PSU's a bit shorthanded in that area for obvious reasons.

Know Your Enemy: Minnesota
(Without a Peer)

I'm not even going to try writing a Minnesota preview this season. Thanks to the FoTYTs at RPI blog Without a Peer, I can just shoot out the link to this one again, since it deftly blends the past into the present as I like to do it, except better.

A bit south of Buffalo, the present growth trend of USA Hockey-registered players in western Pennsylvania - often called The Crosby Effect, after Sidney of course - has continued for an eighth straight year. Impressively, the western half of the commonwealth, despite being at a fairly substantial population disadvantage to the east, accounts for more than 13,000 of the roughly 30,000 Keystone Staters who play hockey.

Pennsylvania, which was frequently beaked as "not a hockey state" back when Penn State announced its NCAA transition plans, has the fifth-most registered players in the nation.

I'm not sure how Alabama-Huntsville continues to land quality coaches given the program's still-lingering uncertainties, but they've pulled it off once again in the form of now-former Air Force assistant Mike Corbett, a much better Corbett than the one we got stuck with.


"Mike Corbett has spent the last decade recruiting elite young men to the United States Air Force Academy and winning championships," said UAH Director of Athletics Dr. E.J. Brophy. "We are very confident that he is the man to lead Charger Hockey into the prestigious WCHA and back to winning on a consistent basis here at UAH."

Former coach Kurt Kleinendorst, who left the program suddenly and after only one season back in May to return to the professional ranks, can now sleep at night I suppose.

Let's close this out with a shot of the community rink at Pegula Ice Arena, because it's a vitally important part of the facility that always gets the short end of the stick. 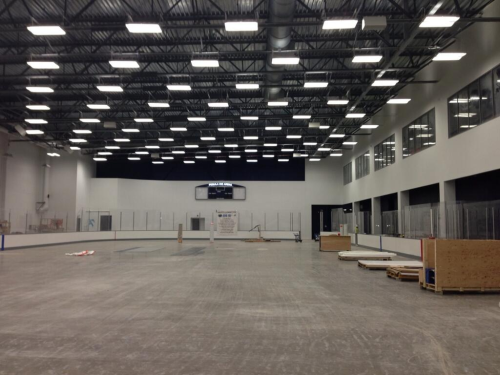