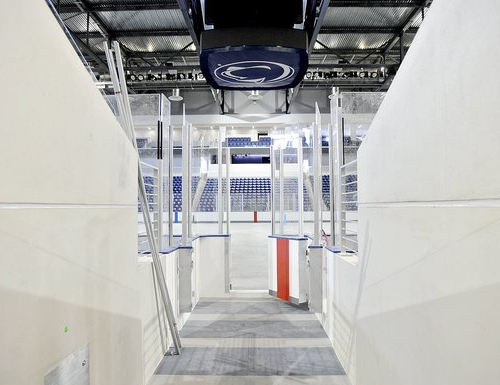 Ordinarily, I frown on writing posts just to say "you should read this article." The style that's sort of evolved here dictates that things like that go in the next Three Stars entry, with separate posts reserved for items of immediate concern, stories where I can offer extra insight, longer opinion pieces and news complex enough to involve several sources and detailed explanation.

The Centre Daily Times, including writer Gordon Brunskill and photographer Abby Drey, received an all-access tour of Pegula Ice Arena on Friday. Their reporting on the tour ran on Sunday and is, quite simply, the most comprehensive look the public has received of the 95-percent-complete facility to date. So yes, you should read this article. And look at the accompanying photo gallery (teaser above) and video.

I trust that you'll do those things, but in the name of disseminating the news presented beyond "wow, the arena looks unreal," Brunskill's work provided updates on three important areas.

According to Joe Battista, only about 225 season tickets remain. That figure includes roughly 30 club seats and a handful on the glass. Loges are sold out. A few hundred tickets are being held back for single-game sales, but assuming the 1,050-seat student section sells out with little issue when those tickets go on sale in September, it's fair to say that every men's game in 2013-2014 will be played to a full house or very close to it.

Notably, Battista said that the budget included an assumption of attendance at 75 percent capacity, so hey, windfall.

All of this, obviously, is subject to tweaking, but nevertheless...

August 15th: The first layer of ice will be put down.
August 19th: Projected date of the first person on ice with skates.
September 6th: The official move-in date for NCAA personnel, with others following throughout the month. The men's and women's teams will be able to conduct (informal, of course, a new arena doesn't grant an exemption from NCAA rules) workouts immediately.
September 16th: Public tours of the arena will begin.
September 28th: A "soft opening" to test the plumbing, equipment and amenities.
October 11th: The PIA's first men's game, against Army. The building will be dedicated at 1:30 p.m. and gates will open at 6:00 p.m. for the 8:00 puck drop.
October 18th: The first women's game at the arena, with Union as the opponent.

Not too much, as one might expect with that whole "95 complete" thing. There are a few remaining tasks in the community rink, including installation of the 300 bleacher seats. Work also needs to be done on the PIA's restaurants, which will be open to the public daily and include a Subway, an Auntie Anne's and a coffee shop (that will be something other than a Tim Horton's, sorry everyone).
Posted by Kyle Rossi at 4:56 AM