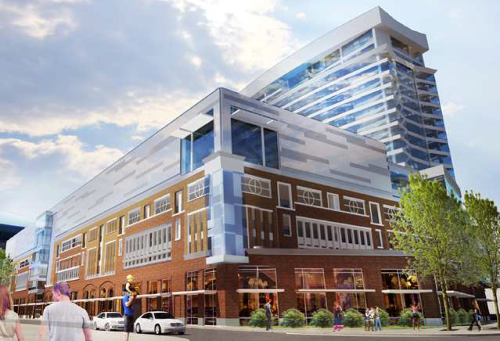 Canisius College and HARBORcenter, Terry and Kim Pegula's $172 million twin rink, retail, hotel and restaurant complex in downtown Buffalo, have finally made it official after roughly nine months of negotiations: the Golden Griffins are moving in upon the project's completion, scheduled for September 2014.

The canned quotes from Canisius president John J. Hurley, athletic director Bill Maher and head coach Dave Smith are nearly identical (as those things tend to be), so let's stick with Smith as the guy closest to hockey.


“This is an exciting day for our hockey program. Partnering with the Buffalo Sabres in a world-class hockey facility further illustrates the commitment to Division I college hockey by Canisius. This top-notch arena will expose fans to a high level of hockey at a number of levels. It will be a tremendous resource with which to recruit, train and develop hockey players. I look forward to the day when a Western New York hockey player competes for the Buffalo Sabres after developing at the HARBORcenter.”

For the school, the agreement is a major boon, as it presently has what could be considered among the worst rink arrangements in Division I. Since 1999, the Griffs have played in Buffalo State's Ice Arena, an 1,800-seat venue on the campus of the DIII school. It's a nice enough place, but hardly ideal for any program with big-time ambition. Overall, Smith's team has seen limited success since moving to DI in 1998 with a 202-256-68 record in 16 seasons. However, Canisius won the Atlantic Hockey tournament last season to advance to the NCAA Tournament and is also looking to position itself as a leader in Buffalo's robust hockey community, with this move being a major step in that strategy.


While it's true that HARBORcenter isn't their rink either, it seems clear that Canisius, who will be the primary tenant for the complex's main 1,800-seat sheet, is receiving first-class treatment.


The Griffs, Buffalo’s only Division I hockey program, will have their own 1,300-square foot state-of-the-art locker room in addition to separate athletic training areas and access to the building’s Center of Excellence, a high-performance training facility which is designed specifically for development in the sport of hockey.

The 700,000-square foot structure will be connected to First Niagara Center by a pedestrian bridge that will span Perry Street. HARBORcenter will also feature a hockey-themed sports bar and restaurant, a full-service Marriott hotel, an 850-space parking structure and additional retail space.

As mentioned in the quote, a Marriott is included as part of the project, and two weeks ago, the contract to run it was awarded to State College-based Shaner Hotels. In other recent news, John Koelmel was named the facility's president, with former Fredonia State player Nik Fattey serving as its director of hockey (similar to the role Ryan Patrick has with Pegula Ice Arena). Fattey is expected to have a busy job - upon completion, HARBORcenter, with the Sabres' nearby First Niagara Center if needed, will likely draw numerous tournaments and showcases, both small and large. Photos of HARBORcenter's construction progress are consistently added to its official Tumblr.


This news isn't of great direct impact to Penn State - should the Nittany Lions play in Buffalo at some point, it's hard to believe that First Niagara Center wouldn't be the site - but it can still be filed under "interesting to know." Officially, the Pegulas have now funded two separate DI venues. Only 57 to go, I suppose.
Posted by Kyle Rossi at 1:23 PM