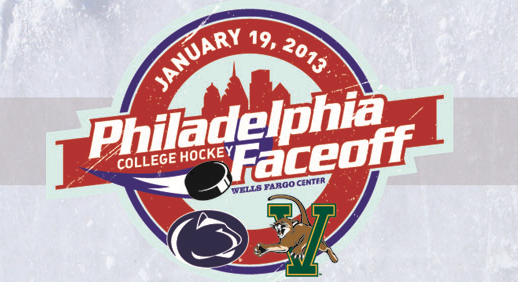 Do I talk too much about 2013 commit Eamon McAdam relative to other recruits? If I do, it's not deliberate - it's because he keeps doing great things and receiving honors like his World Junior A Challenge invite. Here's a nice feature on the big goalie ahead of the WJAC, which officially gets underway today after Team USA lost in a shootout to Canada West in exhibition action on Saturday. The first opponent? Former commit Thomas Welsh and Canada East. U-S-A! U-S-A!

I think my favorite part of this is how dated the photo of Olczyk and Jensen in front of the construction site looks already.

Tickets are on sale for the Philadelphia College Hockey Faceoff. It would be nice if the game sold well so that they invite PSU back, because Philly's an unreal city, and I'd be okay with going to see Penn State play there every year. So buy tickets.

Just because there's no way I'm stepping on the Pittsburgh vs. Philadelphia land mine, Pittsburgh's a great city too. But I already know PSU will be there every year, thanks to the Three Rivers Classic.

Last week, the SBNation network wrote a whole bunch of sponsored posts on...well, iconic NHL families. The Patricks, of course, are the family that touches on Penn State hockey, although former Icers C.J., Ryan and Curtiss Patrick don't get a mention.

Speaking of Icers family connections, here's an interview with Jill Holdcroft. The local product is a tenacious defender as a forward, and she was rewarded for that with a pair of unassisted goals directly resulting from takeaways over the past weekend.

Penn State is 57th, ahead of only Sacred Heart and Alabama-Huntsville. However, the rankings were assembled "a few weeks ago," and the Nittany Lions would almost certainly be higher now, given DI wins over AIC, RIT, Army and Sacred Heart. My honest assessment would be somewhere between 40 and 50 (I think you can argue towards either end of that range). Great by established program standards? Not really. But better than roughly 20 percent of DI, which at this point, is fantastic.

It's hard to have too much of a beef with the fact that nominees Shannon Yoxheimer (for both Player and Rookie of the Month) and Nicole Paniccia (for Goaltender of the Month) didn't win, but Yox had six of 16 Penn State goals this season at the time the awards were given out. Rookie award winner Emily Janiga scored nine times to lead Mercyhurst in that category, but the Lakers as a team had 47. There's really very little question in my mind that Yox is more important to her team's offense.

And yes, I'm going to keep calling her Yox until a) it catches on or b) she tells me to stop.

BCHLer Brady Shaw had been a Penn State target but, like the headline says, will be going to Bentley instead.

Joe Battista: You Can't Always Get What You Want
(statecollege.com)

I'm not sure what this "football" is that Joe Battista keeps going on about, but regardless, funny Icers story incoming.

In 1994 we were coming off a devastating loss in the national title game in what we commonly refer to in Icer history as the “33 and the wrong one” season. We entered the national championship game undefeated at 33-0, but our coronation never occurred as we got upset in the finals, 2-1. Devastating doesn’t begin to describe the emotions in that dressing room after the game. We had nine amazing seniors who deserved better and it was our “destiny” to be undefeated national champions. But it didn’t happen. It didn’t go the way we planned.

So as we prepared for Nationals for the 1994 season, we put together one of the best motivational videos I have ever seen set to the fiery Queen hit, “I Want It All.” It was a favorite video for years of the kids at hockey camp, and it would have had the perfect ending except for one thing: We didn’t win. In fact, in my 19 years as head coach, it was our worst finish at the national tournament. We came in sixth place.

At that year’s banquet, we played the “I Want It All” motivational tape for the parents and boosters who all thought it was amazing. In a feeble attempt at post-loss humor, we played our Nationals highlight tape set to the Rolling Stones hit song, “You Can't Always Get What You Want.”

The video below has swearing, just so everyone knows before playing it, but it's still my reaction. IDIOTS! SAVAGES! IDIOTS!

Leading up to that Philly Frozen Four, the NCAA tournament will be played in the cities mentioned in the headline. If you're new to this, the same sites get the regionals almost literally every single year. Cincinnati's not in that club, however, so their selection has received the most attention of the four.

Is this pertinent to Penn State in any way? Here's hoping.

Know what freaks me out? When our recruits have player pages identifying them as members of the major junior QMJHL's Moncton Wildcats. As of right now everything's okay - he's still a member of the USHL's Muskegon Lumberjacks and still committed to Penn State - but it's a long way until 2015. Garland was a sixth-round pick of the Wildcats back in June, which at least partly explains this page's existence.

If I didn't despise Illinois, dating all the way back to the time an obese Illini hockey mom tried to fight me at a game, I'd feel bad for them. I do though, so I don't. Good luck with the Jimmy John's pipe dream.

PS. Remember when people used to write articles like this about us at roughly six-month intervals? Minus the university support issue, of course.

Who Should Get The Next B1G Hockey Invite?
(B1G Ice Hockey)

And while we're on that, here's a nice rundown of the statuses of the six non-hockey Big Ten schools. I've said it before, but I really believe that Illinois, Nebraska and Indiana will be the next three in. But including Illinois might be a little generous - the simple reality is that having a good ACHA program can help, but you're still going to need a facility and/or a giant check at some point. PSU's ACHA success helped get those things, but I think most realize how extremely fortunate we are that it worked out like that. Unless your ACHA program can inspire the necessary donations and university support, being a good D1 and even winning Murdoch Cups doesn't really matter all that much in terms of jumping to the NCAA.

Really, the odds-on favorites should be the schools either building or planning new basketball arenas with ice capabilities (why Nebraska and Indiana are two of my top three). Even that's hardly a guarantee. The Jordan Center was supposed to include an ice plant, but it was cut due to overruns. And you still need to cover the actual expenses of the program(s), easier said than done in today's climate.

TPS' Guy Flaming has been all over the bizarre CHLPA saga from the beginning, so it's worth reading this post as well as the others he's made on the topic. He's been widely praised - with good reason - for keeping an open mind without losing a healthy degree of skepticism.

The essentials are that three months ago, a "union" formed, purportedly to represent major junior hockey players, with former NHL enforcer Georges Laraque as executive director. Following a stretch of the association lingering in the background, people wondering who was behind the effort and some suspicious behavior like ducking interview requests, the whole thing blew up on Halloween when it turned out that fraud convict Randy Gumbley had been dressed as CHLPA spokesperson Derek Clarke for a while. Or something like that. Amidst that and some other general weirdness, Laraque resigned, the union's legal representation pulled out, and the whole thing is on life support.

Of interest though, the CHLPA did have big plans with respect to NCAA hockey. Much of its work since its August founding was aimed at addressing the educational concerns of players, and one of the primary thrusts in that department was an attempt to get the NCAA to reclassify major junior hockey as amateur, which of course would mean that CHL players would retain college eligibility. Would it have worked? Probably not, but we'll likely never know.
Posted by Kyle Rossi at 12:07 AM