While the much-anticipated frankenweekend for the Ice Lions did not develop (a second game on Sunday at ACHA Division 1 Lebanon Valley College was cancelled), PSU still had a tough task in the form of three top D2 programs at the Siena Showcase. Mission accomplished: the Ice Lions are now 8-3-1 (3-0-0 MACHA North) following a 2-1-0 mark in Loudonville, NY. 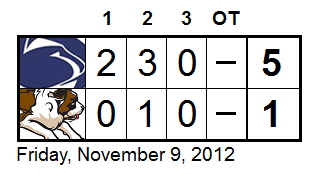 The Ice Lions opened up by blasting the hosts on Friday evening, courtesy of five different goal scorers and a 16-save effort from Kevin Lowthert.

Franky Reluzco, PSU's leading scorer so far, tallied about ten minutes into the game with an unassisted effort, and Joe Zitarelli made it 2-0 from Chris Lewis and Mike Broccolo just 44 seconds later.

In the second period, Siena's Brian Sisti answered with Austin Meehan in the box for a butt-ending major, but a barrage from Fredrik Linge, Neil Laessig and Taylor Vincent over a 6:10 span later in the period ended any comeback thoughts the Saints may have entertained.

The game was a rematch of one from last year's ACHA national championships, won 5-0 by Penn State. 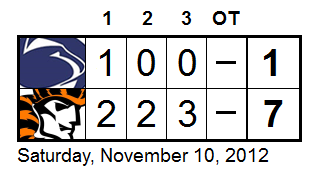 In the always-dangerous middle game of a tough weekend, PSU was downed 7-1 by New Jersey's William Paterson University. WPU, now 7-2-1, is a D2 power, having appeared at the ACHA national championships each of the last four years.

Still, the score was a little flattering to the Pioneers. Thanks to a Lewis goal (assisted by Tyler Person and Max O'Malley), PSU was only down 2-1 heading into the second period and missed a prime opportunity to tie the game with 1:31 of carryover power play time on fresh ice. The Ice Lions also outshot WPU 20-10 in the first period.


“We needed to make adjustments because our goaltender won that period for us”, said [WPU] Coach [Joe] Ballance.

The score remained 2-1 late into the second period when a Pioneer timeout after an icing call played a role in shifting the game away from its established tightness.


“We wanted to both regroup and get a fresh line out on the ice because of the no change icing”, said Coach Ballance. After the timeout, the Pioneers played with some energy and would score a minute later as Freshman Mark Apidopolous (Paramus, NJ) would score his first goal of his collegiate career with assists coming from Kyle Garlasco and Ryan Mara. “It was a great feeling to get my first college hockey goal. I got a great pass from Garlasco and I got all of my shot and it beat the Penn State goaltender,” said Apidopolous.

Following the Apidopolous goal, the floodgates opened. The freshman added a second to cap the game's scoring, but Jonathan Craig, Jeremy Lewis and Matthew Hunter also scored in between the two. 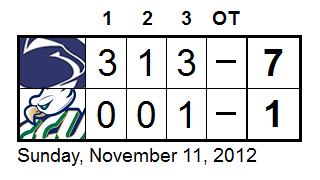 PSU wrapped up what, on balance, has to be considered a successful weekend by dusting the defending ACHA Division 2 national champions. Florida Gulf Coast has actually struggled so far this year at 3-6-2 overall, but did beat Oakland (the team that ended the Icers' final season is presently ranked 8th in D1) 5-1 back on October 5th to show that they still have something in the tank.

The Eagles were unable to score until finally breaking Lowthert's shutout bid with 32 seconds left - but by then, the Ice Lions had already bombed FGCU goalie Ryan Lynch with 49 shots, scoring on seven of them. Ben Snow had two snipes, while Lewis added a goal and two assists. Broccolo, Zitarelli, Meehan and Vincent were the other Ice Lions goal scorers.

Following the blowout of Maryland on November 3rd that boosted the team's record to 3-1-1, it's increasingly likely that the ACHA women are done for the semester, as they have been unable to secure an opponent for the scheduled December 14th home game (it's proven tough to book largely because it involves finals week travel for many schools). Without that game, the team's next match won't be until January 13th at Navy.

The first Women's Division 2 poll of the season will probably be released this week - it will be interesting to see how the coaches handle PSU, which does meet minimum game requirements for an ACHA National Tournament invite. For ranking purposes, teams are divided into east and west regions, with the top four from each region at the end of the year receiving a bid to the championships.
Posted by Kyle Rossi at 10:39 AM