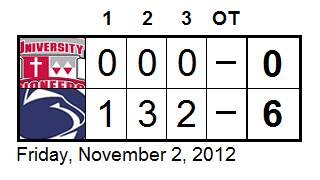 Hannah Hoenshell recorded the first hat trick of the NCAA era, while Nicole Paniccia and Brooke Meyer combined on the first shutout of the NCAA era, as Penn State won at home for the first time in the NCAA era, 6-0 over Sacred Heart. The Nittany Lions are now 3-5-1 (0-3-1 CHA) while SHU drops to 3-5-0 overall and 1-5-0 against NCAA competition. The teams square off again Saturday afternoon at 2:00 p.m.

It would be tough to argue that a contest featuring a 66-18 shot margin was, well, much of a contest. Sixteen of the 18 Nittany Lion skaters recorded at least one of the 66, led by Hoenshell's 11. Another 16 finished with at least a +1 rating (the two missing players on each stat were different). While Hoenshell will deservedly get the headlines, this win was without question a balanced effort.

Hoenshell opened the scoring 7:16 into the game by poking home a rebound that managed to rest unseen between Pioneer goalie Alexius Schutt's legs for a couple seconds. Her other two goals were much prettier, involving combinations of wheels and dangles that are quickly becoming commonplace from the former Alliance Bulldogs scoring dynamo who missed the early part of the season with an ankle injury. Complementing the Texas native were two goals from Shannon Yoxheimer and Jill Holdcroft's first college tally, a heady defensive play that turned into a spectacular solo breakaway effort. Jess Desorcie and Emily Laurenzi each had a pair of assists.

Contributions from beyond the scoresheet were numerous, however. I thought the line of Kendra Rasmussen, flanked by Jenna Welch and Tess Weaver had a great game. Despite not recording a point, the trio was offensively dangerous - combined, they generated 17 shots - and also drew the first two penalties of the night. While the defense didn't have much do in this tilt, the pair of Paige Jahnke and Jeanette Bateman continued to be sturdy with a dash of offense, while Lindsay Reihl was instrumental in shutting down several Pioneer rushes.

Here's the live blog from this first game of the series: