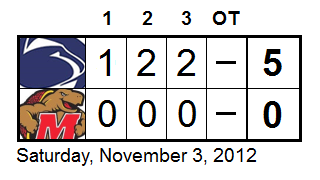 Goalies Katie Vaughan and Sarah Eisenhut, who are 1-2 in ACHA Women's Division 2 in goals against average, bolstered that status with a combined shutout of the Terps, who entered the game with a 3-1-0 record and scored 18 times during a three-game winning streak that PSU snapped. Vaughan played the majority of the game and made 15 saves, before Eisenhut finished up the last couple minutes, saving a pair. PSU fired 28 shots on the Maryland cage.

Fisk jump started the offense early by scoring on the very first shift of the game, then added another in the second period. Penn State's third tally came from a somewhat unusual source: Mary Kate Tonetti, who played goalie for the Lady Icers last year (and before that, obviously) but moved to forward this year to help the team achieve positional balance. It was her first-ever goal, although she scored like she had been doing it for a while, with two Terps proving no contest for the former West Chester Quaker.


In the third period, Fisk scored her third of the game and sixth of the season, while captain Carly Szyszko finished things off on a breakway.

The club's next game is scheduled to be their Ice Pavilion debut on December 14th, although no opponent has committed for the date as of yet.

Despite having their pair of games in New Jersey postponed for obvious reasons, the Ice Lions (6-2-1, 3-0-0 MACHA North) were not light on news last week. Senior Joe Zitarelli, an Icer for two seasons, was named captain for this season, succeeding the graduated Jim Recupero. He'll be assisted by fellow senior Mac Winchester and sophomore Chris Lewis.

Furthermore, the first set of ACHA Division 2 rankings of the season were released Thursday. Penn State was voted fourth in the southeast region, behind Miami, Rowan and Bowling Green. It's worth reiterating that the top two teams in each of the four regions at the end of the regular season get autobids to the ACHA national tournament, while the teams ranked third through tenth in each region compete in a playoff to determine the other half of the national championship contenders. Long story short, the Ice Lions are in position to keep the season going right now, but they'd prefer to climb at least two slots by February.

This weekend, the team will travel to Siena College in Loudonville, NY for games against the Saints, William Paterson and Florida Gulf Coast. It's a pretty daunting slate of games, as all three of those teams appeared at nationals last year, and all three are ranked in the top nine of their respective regions this year. It's made even more difficult by the fact that following the Sunday morning game with FGCU, PSU will head down to Hershey for a night game against ACHA D1 Lebanon Valley College.
Posted by Kyle Rossi at 1:45 AM