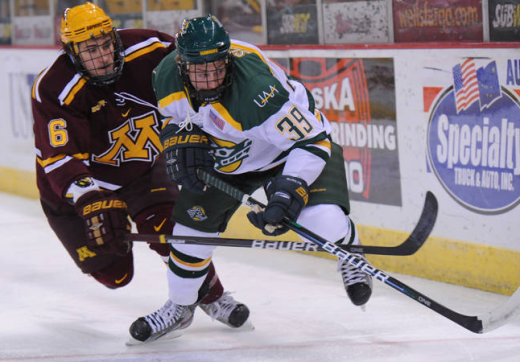 Eric Scheid, who was Alaska-Anchorage's fourth-leading scorer as a freshman in 2011-2012, has elected to resume his college career at Penn State, according to the Lincoln Stars' Twitter account and other sources.

Scheid left UAA over the summer and returned to Lincoln, where he's been outstanding in his second tour with the Stars. In addition to his point total, good for second best on the team and tied for 21st in the USHL, his +15 rating is tops in the league. Furthermore, Lincoln is off to a torrid 11-3-0 start, two points behind first-place Waterloo but with a pair of games in hand.

The Minnesota native didn't mince words with respect to his reasons for departing Anchorage and playing in the USHL this season.


“I didn’t think I could see myself playing there for four years. I kind of had my sights set on something a little higher, like somewhere where I could maybe make a run at a championship. If I leave I have to transfer and sit out a year, so instead of practicing with a school I might as well come back to Lincoln and play 60 games. You can’t complain about playing here.”

The massive college hockey realignment coming next summer will see Scheid's former school, already a perennial WCHA doormat, relegated to a reformatted conference that will not be considered among the nation's best. Accordingly, he looked primarily at programs in the newly-formed power conferences, the Big Ten and NCHC. As part of that process, he visited Penn State on October 22nd and was apparently satisfied with his experience.

A productive USHL player? There's no complaining about that. A productive USHL player and with previous NCAA DI experience? Jackpot, for what will still qualify as a green roster (and program, for that matter) heading into Big Ten play next season. While hitting the transfer market isn't anything new for Guy Gadowsky and his staff - see Justin Kirchhevel (who attended UAA for the year prior to Scheid's time there), Bryce Johnson, Taylor Holstrom, Max Gardiner and Nate Jensen - it's certainly not a bad idea to maintain a steady flow of DI vets in these formative years. Scheid's addition will also help balance a roster that may actually end up with fewer upperclass players next year - every "original Icer" other than Mike McDonagh and Matt Madrazo is set to graduate following this season.

While at Alaska-Anchorage, Scheid earned three starts in his 30 games played. The obvious highlight: his pair of rebound goals, one of which was the overtime winner, on February 17th that helped the Seawolves to a 3-2 win at St. Cloud State. It was UAA's first-ever win at the National Hockey Center, snapping a 34-game winless skid in the venue. Another multi-point game came last November 26th, with Scheid's two assists contributing to a 5-5 tie at Minnesota State. Two weeks prior to that, his first collegiate goal opened the scoring at then-defending national champion Minnesota-Duluth.

As indicated above, this year represents Scheid's second stint in the USHL. With the Stars two seasons ago, he was a key contributor to a team that enjoyed a 33-22-5 campaign, good for fifth place in the Western Conference and a playoff spot. Among his 15 markers in 2010-2011 were three game winners, two of which came against future teammates (Joe Lordo on November 13, 2010, 2013 commit Zach Saar on March 26, 2011). Scheid was Lincoln's 10th round pick in the 2010 USHL Entry Draft - it's safe to say that they got decent value there.

In 2009-2010, the son of former Wisconsin center Jim Scheid (a Badger from 1976 through 1980) played his senior season at Blaine (MN) High School and was the second-leading scorer on a Bengals team that won the Section 5AA championship. The guy ahead of him? NHL first-rounder Nick Bjugstad, who led Minnesota with 25 goals last season (the Gophers, of course, made the Frozen Four). No shame in that.


So what kind of player are we getting? To answer that question, let's consult someone who would know better than me - Yeti of Lincoln Stars blog Black and Blue (make sure you're checking out both the site and its Twitter account for the latest on Scheid throughout this season). Here are his unedited thoughts.

Scheid is a great get for a program like Penn State. As you are well aware, Scheid was originally here in Lincoln a couple of years ago for one season before committing to UAA. In 2010-11, he really wasn't a guy that stood out here in Lincoln, although he did have a solid year (36 points in 57 games). He wasn't a guy who was getting top three minutes.... but not really getting bottom six minutes either. Second or third line guy most of the season, for the most part. I didn't see much grit from him that season compared to what I see today.

Fast-forward to this past Summer, when it was announced that he was leaving UAA and coming back to Lincoln. Scheid is a '92, and this season any player born in 1992 is considered an "overager." Each USHL team can roster a maximum of four overagers this season. The Stars had a number of '92's coming back this season, so some tough decisions had to be made in terms of which '92's would make the team. I was at Lincoln's tryout camp this past June in Minneapolis, and Scheid definitely stood out. He was quicker than what I remembered, and definitely had some grit to his game that I didn't notice before. His play at the tryout camp made it easy for the Stars coaches to pick him as one of the four overagers on the team.

The Stars started this season with a ten-game winning streak, and Eric was a big part of that. We've had some key players start the season kind of slow, so if it wasn't for Eric and a few other forwards, I don't think the Stars would have started the season as fast as they have. They've cooled down a bit since then, having lost three of their last four, but they are still two points out of first place and have the best winning percentage in the USHL Western Conference. Scheid is definitely a first line guy now, and gets plenty of both PP and PK minutes. As the head coach here likes to say, getting PP and PK minutes are a privilege. Scheid certainly plays well enough to earn those special teams minutes.

What I really like about Eric this season is that he's shooting the puck more.... which was something I wish he would have done more back in 2010-11. Back then he was averaging about 1.6 shots per game. This season he is averaging 2.2 shots per game. He's still a pass first type of player, but he has shown that he can be a goal scorer when he wants to. As I stated above, he's playing with more grit and sandpaper in his game, which is fun to watch. He's not a pest or anything like that, but he's not afraid of the corners and not afraid of contact. Speed is his primary game. One of the fastest players on the Stars this season.
Posted by Kyle Rossi at 4:16 AM