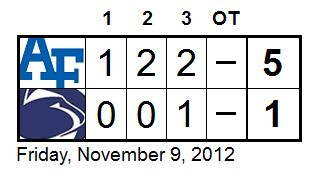 Falcons head coach Frank Serratore might not agree with me, at least based on his observations of his team's play (if you haven't seen it already, his postgame is a must-watch), but the visitors were a giant leap in caliber from anything the Nittany Lions have seen to this point. PSU has had success against teams that usually finish towards the bottom of Atlantic Hockey. Air Force wins that conference just about every year. And then they take their NCAA autobid and make teams like Boston College sweat bullets.

So when PSU's first-year NCAA program comes out of a game with a program like that regretting a few missed opportunities and mistakes that could have turned a relatively evenly-played game down a different route, yeah, that's pretty encouraging and even leaves hope of salvaging a split from Saturday night's rematch.

The first mistake of consequence came with 12:03 left in the first period, when a botched line change allowed Casey Kleisinger to take Max Hartner's pass and find enough space between the circles to pump the game's opening score past P.J. Musico. The first missed opportunity came when Penn State received six minutes of unconverted power play time over 7:19 of game time, beginning just 22 seconds after Kleisinger's goal. The Nittany Lions' power play moved the puck effectively and generated chances, particularly during the last two of the three penalties, but Falcons' goalie Jason Torf was equal to the challenge. Torf finished with 34 saves on 35 shots, and PSU's power play finished 0-for-6.

Air Force successfully sucked much the flow out of the game once capturing the lead, limiting the Nittany Lions almost entirely to the perimeter in the second period (only three of 19 PSU attempts were charted between the circles). In that middle period, Kyle De Laurell would make the score 2-0 by finishing a tic-tac-toe passing play in transition with Cole Gunner and Ben Carey, while Chad Demers buried a turnover Tony Thomas generated off of Luke Juha in front of the PSU cage to make it 3-0.

Justin Kirchhevel's brilliant individual effort during a 4-on-3 Falcons advantage cut the deficit to 3-1 in the third period. The Alaska-Anchorage transfer won the race to an errant pass on the boards near the line, chipped it around the AFA point man, streaked in on right wing and went bar-down on Torf to get PSU on the board with the school's first NCAA shorthanded goal. At that point, with 11:35 left, the Nittany Lions did have a glimmer of momentum, but one that was halted less than a minute later on Stephen Carew's power play goal. Thomas capped the scoring against an empty net.