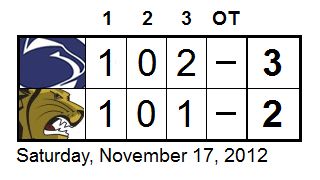 So...about that non-linear growth process I mentioned yesterday? It's pretty linear when only looking at the two games with Lindenwood this weekend. Slope? Over 9,000.


"I am tremendously proud of the effort and resilience our student-athletes showed today." Head coach Josh Brandwene said. "It was a total team effort at both ends of the ice."

Make no mistake, much like Friday's 5-1 loss, Penn State (5-8-1, 1-6-1 CHA) spent much of Saturday's game trying to bounce back. The difference is that this time around, the Nittany Lions did so - more than once. In doing so, the team proved once again that it's headed in the direction of a peak right around early March and the College Hockey America league tournament.

Just as happened in each of the previous day's three periods, Lindenwood (1-11-0, 1-3-0 CHA) struck in the first four minutes of the first period on Saturday afternoon. Fresh off of helping to win a battle for the puck in the offensive corner, Alyssa West escaped to the slot and got the puck high to Chelsea Witwicke. Witwicke then snuck a shot though Nicole Paniccia - who made her tenth straight start in PSU's cage and made 28 saves - from left point. And just like in the first period of the series opener, Jill Holdcroft responded with a late-period power play rebound goal following a Shannon Yoxheimer shot, with Jordin Pardoski getting second assist. Yep, same scoring line, same general methodology, although this time around it came a couple minutes later, at the 17:39 mark.

The game finally broke script almost 30 game minutes later, when a quick exchange of goals took place in the third period. Lindenwood regained the lead at 2-1 when West followed up on a rebound through traffic generated by Alison Wickenheiser's streaking effort with Birdie Shaw off for checking. Captain Taylor Gross answered just 36 seconds later, with Yoxheimer picking up her second assist.


Win or lose, one of the game's themes was destined to be Penn State's power play. The Lady Lions took 10 minor penalties in all, and outside of Holdcroft's goal, things looked quite ugly in that department for a while. PSU failed to convert on consecutive penalties (separated by just 30 seconds) early in the first period, on 1:27 of 5-on-3 time in the second period, and on three other more typical attempts. In no uncertain terms, had Penn State lost the game, those missed opportunities would have been a primary culprit.

Emily Laurenzi, though, had other ideas. Her goal - yep, on the advantage - with 5:50 remaining boosted the Nittany Lions to the win and ensured that any storylines concerning PSU's power play would be positive ones, as the unit finished a respectable 2-for-9. Paige Jahnke and Hannah Hoenshell assisted on the decisive goal, which clinched Penn State's first-ever CHA win.

A first win, sure, but also a vital one, because the degree of difficulty gets exponentially (that's also non-linear, if you're scoring at home) greater from here. Following a week off for Thanksgiving, Penn State will travel to Erie for a pair of games against national power Mercyhurst on November 30th and December 1st. The skinny on the Lakers: eight NCAA tournament appearances in a row (including Frozen Four appearances in 2009 and 2010), every regular season and playoff championship in CHA history until being upset by Robert Morris in last year's tournament final. After Mercyhurst, Penn State closes the fall semester with two at St. Lawrence, which has made nine NCAA tournaments and five Frozen Fours since 2001.

One major black mark on the weekend were the deficient efforts of Lindenwood's scorer and video crew, as scoring errors and inconsistent transmissions plagued both games. In Saturday's contest for example, Holdcroft's goal was credited to Gross, then to Yoxheimer, then back to Gross, before finally to the Pennsylvania Furnace sparkplug. Laurenzi's winner was initially credited to Micayla Catanzariti, and even appeared that way briefly in the GoPSUSports.com recap. I suppose LU's posting a video showing each of their goals in the game could be considered an olive branch, although including the Nittany Lions' scores would have been a better way to get back in my good graces. Penn State's scorer and broadcasters will undoubtedly do a better job when the Lions visit the Ice Pavilion on February 8th and 9th...but I'm rattled enough to think that I should probably attend those games, just in case.