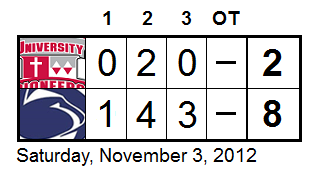 In some ways, the 8-2 thrashing Penn State (4-5-1, 0-3-1 CHA) laid on Sacred Heart (3-6-0, 1-6-0 NCAA) Saturday afternoon resembled the 6-0 result from Friday evening. The Nittany Lions, in completing a first-ever NCAA sweep, were largely in control throughout and never seriously threatened past the middle of the second period. PSU put 64 shots on net, just two shy of Friday's 66.

Yet in a couple of important ways, it was very different. Unlike the Hannah Hoenshell / Shannon Yoxheimer show on Friday, the eight goals Saturday came from eight different players, with Kendra Rasmussen, Jenna Welch, Madison Smiddy and Emily Laurenzi all recording their first goals of the season. For freshmen Rasmussen (whose tally technically stood as the game winner) and Laurenzi, the goals were career firsts. Welch obviously scored at UConn, so this was merely her first at Penn State. Smiddy scored for the Lady Icers last year, but today marked her first goal at the NCAA level. The other goals came from more typical suspects like Yoxheimer, who scored from a sharp angle off left wing to open the game's scoring with 5:54 left in the first period.

Another difference was the pushback offered by the Pioneers, who got two past Nicole Paniccia after being shut out Friday. Thirteen seconds into the second period, and eleven seconds after Lindsay Reihl's hooking penalty expired, Melissa Robbins (probably SHU's best player this weekend) tied the game at one. The Nittany Lion response, however, was swift and decisive as Taylor Gross, Rasmussen and Jill Holdcroft all tallied in a 3:23 second-period span to regain the advantage at an ultimately insurmountable 4-1. Holdcroft's goal was particularly noteworthy - for the second straight game, she dispossesed a Pioneer and took it in herself. Jess Desorcie then answered SHU's Whitney Henderson off a rebound from a Gross shot to make the score 5-2 after 40 minutes.

Next week, the road gets a little tougher as defending CHA tournament champ Robert Morris rolls into town for a Saturday-Sunday series, the Nittany Lions' final Ice Pavilion matches of the semester.