While John Buccigross and Tim Horton's are easily the two most overrated things in the hockey world, I'm a big fan of this tweet:

Yep, the Big Three, New York (which I believe should apply for provisional membership in a Big Four for reasons beyond player counts), then Pennsylvania.

Arguably the biggest news in college hockey this week was the discovery that Atlantic Hockey has held at least preliminary discussions with four schools about joining. One, somewhat obviously, is NCAA Division I independent Alabama-Huntsville. The others are ACHA D1ers Rhode Island and Navy, and NCAA DIII's St. Anselm.

Other than the nostalgia involved with two former ESCHL rivals of the Icers potentially making the jump, there's actually a very significant Penn State tie-in, related to the presence of women's programs at a couple of the schools, and their likely conference destination should this all play out.


"We have met and the ball is in their court right now," said conference commissioner Bob DeGregorio [about St. Anselm]. "They would make a great addition to the league. They have a great facility and tradition. The women’s program would also be a great addition to [College Hockey America]."

URI, based in Kingston, has formed a committee to look at costs associated with moving both genders of hockey to the Division I level and is interested in the move, despite understanding the commitment that would be needed financially. The Rams currently run one of the finest American Collegiate Hockey Association club teams in the nation and would a very formidable contender.

Tip of the hat to Joshua Kummins, the only writer (of those I read) to pick up on the women's angle to the story. While his focus is New England (see the "Boston" part of "SB Nation Boston"), it should be noted that Navy could also elevate a women's program. UAH, on the other hand, already has its men's program in DI, is (I'm assuming) Title IX compliant, and can barely afford to keep things going as is. So...yeah, they probably won't be adding a women's program and joining the CHA.

Of course, then there's the whole Maryland/Rutgers thing...see you next week for that, if the rumors are in fact true. 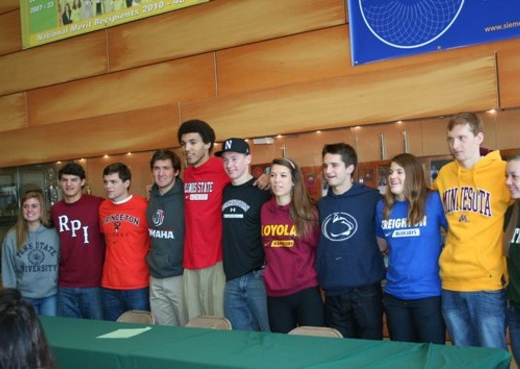 Something pretty cool about this photo from an NLI signing event at Edina High School in Minnesota last Wednesday: not only is new women's hockey signee Sarah Nielsen included (far left), but so is Nittany Lions basketball recruit Graham Woodward (the other PSU shirt, obviously).

Joe Battista's column once again took a hockey angle and once again is a solid read. Also, Rob Freaking Shaner.

Fairbanks self-reported and self-punished on a not-all-that-serious infraction that wasn't even specific to hockey. So...nothing to see here? Not so fast.

The issue, it's reported, is still open with the NCAA, so look for Mark Emmert to pin the whole thing on Guy Gadowsky, due to the coach's previous tenure at UAF. While Gadowsky left for Princeton in 2004, three years before the period in question, it takes 15 seconds to look that up on the internet and the NCAA doesn't conduct investigations anymore. The result: Penn State hockey will be hit with a postseason ban and a loss of scholarships.

Scheduling is always an issue for the ACHA teams based in the western United States, so it's nice to see the D1s out there band together now that there are enough of them to do so. Arizona, Arizona State, Oklahoma and Central Oklahoma will join newly-promoted Colorado and Colorado State in the WCHL next year.

As the parade of people who aren't me continues through the PIA, I'll dial back the bitter and share what they share whenever it pops up.

A writer based in North Dakota said:


The fledgling Penn State men’s hockey program also deserves some credit. Playing this year as an independent and preparing to join the new Big 10 Hockey Conference next season, PSU has put together a 6-3 record while playing a decent schedule.

What's the news there? Re-read the first six words of the entry.

Stopping Predators - Its All of Our Responsibilities
(juniorhockey.com)

The name of Jerry Sandusky is all to familiar to the public following the trail and downfall of one of the most respected football programs in America. Sandusky's predatory behavior has forever changed the way we think about Penn State and Joe Paterno. Organizations like Penn State and their administration were so intent and embarrassed about what allegations of sexual inappropriate behavior would do to their programs that they either looked the other way or even shielded Sandusky. The program and reputations are tarnished. 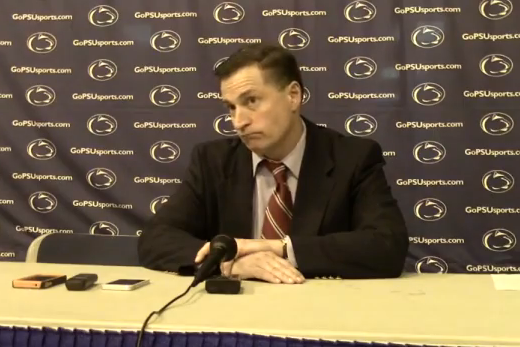 For all of their scorekeeping and broadcast production issues over the weekend, I was a big fan of Lindenwood's game notes ahead of the series with the women's team.


Lindenwood and Penn State are meeting for the first time as NCAA members. The two teams met six times during their time in the ACHA, and Lindenwood won all six contests.

How did the Penn State side handle that information?

This would be hilarious, but for the fact that it really isn't.

The contrasts between PSU and Lindenwood are striking in that department, despite the similarities in the transitions of the two programs. LU's ACHA results are available on their official website. Their media guide has an all-time game-by-game for the ACHA years, ACHA record holders, ACHA All-Americans, team photos of their ACHA national champions and, for their current players who played in the ACHA, an appropriate level of biographical information for those seasons.

In Penn State's version, the "club team" - remember when we used to hate that label? - is grudgingly mentioned on the player pages of those who played for the Lady Icers (curiously, under the heading "Before Penn State," as if the ACHA doesn't even count as playing for Penn State). And really, it only appears at all because it's impossible to explain what Lindsay Reihl's been doing for the three years previous to the current season without including it. Once the Lady Icers have graduated, I wouldn't be surprised if they take every media guide mention with them.

Who's to blame? I wish I knew, so that I could yell at them directly. In the meantime, all I can do is keep complaining while hoping it resonates with someone who has the ability to do something about it.
Posted by Kyle Rossi at 12:02 AM