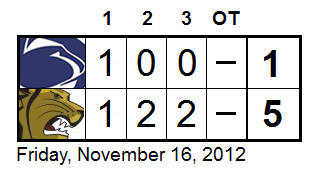 Josh Brandwene's mantra throughout this inaugural NCAA season has been to improve every day, and for the most part, that's precisely what has happened so far. From the unexpected first-game win against Vermont, to the noticeable growth between the two Sacred Heart series, or between the Syracuse and Robert Morris series, the Nittany Lions have generally proceeded on an upward trajectory.

But it's inevitable that something like Friday night's game would come along at some point. Improvement and growth, after all, are not linear. And in fact, losing games that looked very winnable on paper can serve as springboards to further growth.

So when fellow NCAA newcomer Lindenwood (1-10-0, 1-2-0 CHA) finished turning in a dominating 5-1 win against the visiting Nittany Lions (4-8-1, 0-6-1 CHA), my first thought, sure, was disappointment. But my second was excitement, because simply put, I'm eager to see how this young team responds to and learns from this latest hit of adversity in Saturday afternoon's rematch.

On a smaller scale, Penn State was forced to respond to challenges for much of Friday evening, as LU scored within the first 3:43 of each period. With Birdie Shaw off for hooking early in the game, Samantha Redick struck first, stretching far to her right to tuck a rebound around Nicole Paniccia, who made 32 saves in defeat. The second period's early tally was a Kendra Broad cleanup of a loose puck left by Lyndsay Kirkham's wraparound. With PSU still in the game at 3-1 entering the third, Allysson Arcibal's redirection of a Jordyn Constance pass in the early going effectively served as the tilt's dagger.

Lindenwood, of course, added two in the latter half of periods as well, with Arcibal's power play deflection of a Chelsea Witwicke bomb making the score 3-1 late in the second and Alison Wickenheiser's spectacular individual effort out of the corner capping the scoring with 1:24 left. Wickenheiser finished with two assists to go with her goal.

Penn State's lone tally came through Jill Holdcroft, a deserving scorer as (in my opinion) the Nittany Lions' best player throughout. With PSU on the power play late in the first period, the 5'1" package of pure effort got to the dirty area in front and put home a Shannon Yoxheimer rebound to tie the game at one. Holdcroft was equally valuable in other roles as well - she was 8-for-12 on draws, outstanding on the penalty kill and defensively, and as always, gritty and tough to play against. Taylor Gross also stood out for many of the same reasons.

The bottom line, though, is that not too much about this game will make PSU's end-of-the-season highlight reel. But the plan now becomes to use this setback to lead to things that might.