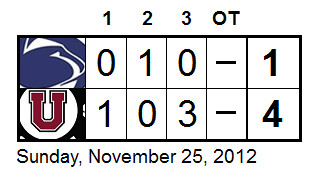 Underneath the surface? I sincerely pity any Penn State hockey fan who didn't drop the $7.95 each night to watch it happen.

It wouldn't have been entirely surprising if the Dutchmen, after what their side may have considered an embarrassingly close 2-0 win over a start-up program Saturday night, had charged back to blast PSU out of Messa Rink Sunday afternoon. That was not the case. In fact, Sunday's effort was arguably an even better one from the Nittany Lions, despite the difference in the final margin.

Once again, PSU's undisputed star was Matt Skoff, who cemented his grip on the top goaltending spot and pushed some of his evident early-season jitters even further into the past. For the second straight day, Skoff set a career high in saves - 42, following 40 Saturday night - and for the second straight day, he gave the Nittany Lions a chance to beat a great hockey team. Some people consider a team lucky when receiving great goaltending to balance out tilted ice. Not me. I just see it as great goaltending from a great goaltender. Hey, that's part of the game too.


Players like David Glen and Kenny Brooks prefer to make their own luck as well. After Union sophomore Daniel Ciampini poked home a rebound of a Greg Coburn point blast to make the score 1-0 for the Dutchmen after 20 minutes, two of PSU's best forwards so far this season put on their hard hats and got to work. Just 50 seconds into the middle period...


From behind the cage, [Max] Gardiner sent the puck to the right corner where Glen slid it across the ice to the right half wall. Brooks chased the puck down and took a shot from the circle that [Union goaltender Troy] Grosenick stopped, but Glen was positioned right on the doorstep to knock it past the netminder.

Two minutes later, Union coach Rick Bennett used his timeout. The strategy worked, as his team largely carried the play for most of the rest of the frame, forcing Skoff's best work of the late afternoon. In all, the freshman was a perfect 17-for-17 in the second period. In addition to shooting the puck with great frequency, the Dutchmen also started to draw penalties. Thanks to two minor penalties to Bryce Johnson and one to Michael Longo, the Nittany Lions spent about half of the last 12:19 of the period playing 4-on-5.

The next penalty, an early third period cross-checking call to Brian Dolan, would prove too much to kill. Quality end-board work from Ciampini and Wayne Simpson resulted in a pass up top to Shayne Gostisbehere. The third-round draft pick of the Philadelphia Flyers then dropped a center-point bomb through traffic and past Skoff. Five minutes later, Mark Bennett won an offensive faceoff to Skoff's left and got to the opposite circle in time to deflect Ryan Forgaard's wrister in for a 3-1 Union lead. The goal was reviewed for a possible high stick on Bennett's part, but upheld.

Just as in Saturday's game, PSU did not fade away in the face of a third period deficit. Following the Bennett goal, the Nittany Lions registered seven of the game's next ten shots. Skoff was pulled for an extra skater with 2:56 left, but Dan Carr took advantage of the empty net for the final goal of the match.

Union goaltender Troy Grosenick, a Hobey Baker Award finalist last year, stopped 37 of the Nittany Lions' 38 shots. Gostisbehere's game-winning goal was the only power play marker of the game from four attempts by each team.

It bears repeating, one last time: against the No. 8 team in the country, which won the ECAC regular season and playoff championships and advanced to the Frozen Four last season, Penn State played two games that were very much in doubt in the third period. As a first-year NCAA Division I program.

And against my nature, I'm thrilled despite losing. Simply put, it's because the day when Penn State fans are justifiably upset about losing to a Union seems closer than ever.