Tickets can be purchased at Ticketmaster.com or through the GIANT Center Box Office, which is open Monday-Saturday from 9 a.m.-5 p.m., at 717-534-3911. General admission tickets will cost $10 each, while club seats will cost $15 each.

According to an email sent to Hershey Bears club seat holders, the Penn State game against former ACHA archrival Ohio on February 1st is being moved from the Ice Pavilion to Hershey's Giant Center, the arena of the Washington Capitals' AHL affiliate.

I'm satisfied with the legitimacy of what I received, so here it is, with the part about it being confidential, the property of Hershey Entertainment & Resorts, etc. conveniently cut off. I threw my ethics out the window a long time ago, no worries there. I did not obtain the attachments referenced in the email. 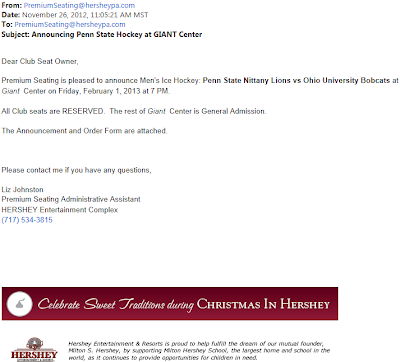 Unfortunately, that's all I know about it at this time - I assume information about honoring tickets purchased when the game was scheduled to be on campus along with refund information for ticket buyers unable to make the trip will be coming with an official announcement. The general admission status of most seats would seem to lend itself to the easy transfer of venues, however. UPDATE: According to the PSU release, the game was not offered in any ticket packages or single-game sales, making the need for honoring tickets or issuing refunds moot. I checked my season tickets and sure enough, the February 1st Ohio game is excluded. Sneaky, sneaky.

On several levels, the move makes sense. For starters, it means that Penn State has played or will play at every NHL or AHL arena in Pennsylvania this season as the program attempts to build a broad following. On October 13th at Mohegan Sun Arena, home of the AHL's Wilkes-Barre/Scranton Penguins, the Nittany Lions beat AIC 4-3 on David Glen's overtime goal for PSU's first NCAA win. The Three Rivers Classic on December 28th and 29th will be played at the Pittsburgh Penguins' Consol Energy Center, while a January 19th game against Vermont will grace the ice of the Pens' cross-commonwealth rivals, the Philadelphia Flyers.

It also grants a bigger stage to the likely final chapter of the legendary Penn State-Ohio rivalry (although it should be mentioned that the final game the next day will still be at the Ice Pavilion). The Icers earned a 48-23-5-8 (W-L-T-OTL) record against the Bobcats from 1981-1982 through last season, including a 9-4 record in ACHA tournament competition. The teams met in the ACHA finals four times, with Ohio winning the 1995 and 2004 titles and PSU emerging with the Murdoch Cup in 1998 and 2003. The aforementioned win over AIC in Wilkes-Barre drew a crowd of 5,389, and a similar throng on February 1st would be a fantastic send-off for the series.

Penn State hockey also has a remarkable history in Hershey, as the 1940-1947 varsity team played eight games at Giant Center's predecessor, Hersheypark Arena (which still stands next door). The informal teams that preceded the first varsity attempt played another eight in Hershey, while the Icers added three, although none more recently than a 6-2 win over Duquesne on January 4, 1980.
Posted by Kyle Rossi at 9:49 PM