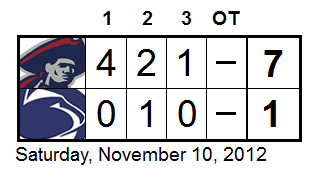 Following Penn State's 7-1 loss to Robert Morris Saturday afternoon, head coach Josh Brandwene accused his team of "playing the scoreboard, not the ice" after the first ten minutes of the game. And truth be told, while the Nittany Lions (4-6-1, 0-4-1 CHA) were playing the ice, they matched up quite well with the defending CHA tournament champs, who improved to 4-2-1 (1-0-0 CHA). The challenge from here, of course, is to do it consistently and for 60 minutes.

In a completely different sense, playing the scoreboard is needed to win hockey games. Someone who did just that: RMU sophomore Rebecca Vint. Vint proved unstoppable with five of the Colonials' seven goals, including three in 4:20 span of the first period. Defender Kylie St. Louis chipped in an unassisted goal off of a turnover, and Thea Imbrogno scored the other one for Robert Morris. All game long, RMU's forwards, including Vint, Imbrogno (who also had an assist), Kelsey Thomas (four assists) and Cobina Delaney (three assists) proved to be be quite a handful for a defense that finally did settle in a little bit over the last 30 minutes.

Shannon Yoxheimer connected for the Nittany Lions' only goal, with a quick shot that surprised RMU goalie Kristen DiCiocco (11 saves in two periods of work) after a faceoff win by Taylor Gross with 3:55 remaining in the second period. The contest was more or less decided at that point but the snipe, Yoxheimer's team-high 10th overall, kept alive a seven-game goal-scoring streak for the Michigan native.

Jeanette Bateman, Jordin Pardoski, Paige Jahnke and Madison Smiddy, along with Gross and Yoxheimer all carried even plus-minus ratings for the game. Pardoski and Bateman also blocked three shots apiece for the Nittany Lions, who will attempt a better result in a rematch Sunday afternoon at 2:00 p.m.