“I expect us to really surprise some people. I think a lot of people have been writing Penn State off to not be competitive for the first couple of years, but people don’t understand how easy it is for Penn State to recruit with their facilities and coaching staff. With the guys they have now, I think next year we’re going to make a big jump and turn a lot of heads.”

I don't normally include recap-ish stuff in Three Stars, but I'm making an exception as a way to give a stick tap to Ken Schott, who covers Union hockey and is easily the hardest-working opponent beat writer I've encountered this season. He made my life ridiculously easy this past weekend with his in-game updates and with his postgame content (including players and coaches from both sides).

This is Schott's blog post about Sunday's PSU-Union game. Be sure to read it, watch the linked videos, and give him a follow on Twitter as well, you won't be disappointed when doing any of those things.

In 2011 and 2012, Penn State sort of flirted with the NHL Entry Draft in the form of Luke Juha and Mark Yanis, both of whom were considered at different points of the process but ultimately passed over. However, it's starting to look more and more likely that PSU will finally have a player drafted (while associated with the school, apologies to Max Gardiner) in 2014, with Eamon McAdam and Bo Pellah standing as the top two candidates for the distinction of being the first.

The latest evidence: the listing of both Pellah and McAdam in the NHL Central Scouting Service preliminary rankings. McAdam was named the USHL's best goaltending prospect, while Pellah received a C rating, which loosely translates to fourth, fifth or sixth round consideration.

McAdam was also named one of five draft-eligible goalies worthy of first or second round consideration by The Pipeline Show.

What If? BC To The Big Ten: A Hockey Perspective
(BC Interruption)

With the Big Ten drastically lowering its standards to chase television sets of late... hey, why not Boston College? Added bonus:


While joining the Big Ten would put BC in a stable football conference and make the athletics department more secure financially, it would be absolutely catastrophic for the hockey program and would effectively destroy BC hockey as we know it.

Get on the phone, Jim Delany.

Deadly Nuts is absolutely one of my favorite blogs because it's sort of what I wish I could be if I was a) funnier and b) less inhibited. Oh, and c) could recap hockey games using MS Paint. Seriously, take a look at this post covering OSU's sweep of Northern Michigan two weekends ago, it's unreal.

A recruiting miss for the women, as Varano considered the Nittany Lions, along with DIII schools Norwich, Castleton State and the University of New England. And picked Sacred Heart, which would be my last choice of the group.

Here's some insight on a possible St. Anselm move to NCAA Division I for both men's and women's hockey - and why it may be more likely now than nine years ago, when a previous batch of serious rumors hit. St. Anselm's women would likely join Penn State in College Hockey America, should DI status become a reality. 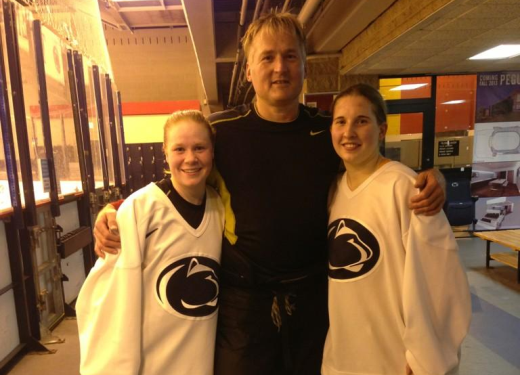 This column calls for a high-ranking official in an organization to resign because he allegedly didn't do enough to stop abuse. Never heard of anything like this happening before, that's for sure.

What do I think? I don't know, ask USA Hockey fanboy Chris Peters what he thinks. Then I'll take the opposite position, because he's probably wrong.

I like to toss something in about Alabama-Huntsville once in a while, just because. This one's a nice update on their present status, which is...


In January, the WCHA is expected to discuss whether to extend an invitation to Alabama-Huntsville to join the league.

“Without a conference, it’s going to be difficult to keep the program, without a doubt,” Chargers coach Kurt Kleinendorst said. “I don’t think the WCHA is looking at it that way — the WCHA needs to do what’s best for the conference. But I think Huntsville has a lot to offer. I don’t see the downside.”

It goes without saying by now, but best of luck to our brothers in non-varsity origins. UAH visits the Ice Pavilion on February 8th and 9th.


I started the year by watching the Rochester Americans, and that lasted for awhile, but it's just not the same. It's not NHL hockey. It's not the Buffalo Sabres. I also covered the Buffalo State men's hockey team and that was very intense, especially in the season opener when they defeated Penn State, but still, after some time, it didn't make up for NHL hockey.