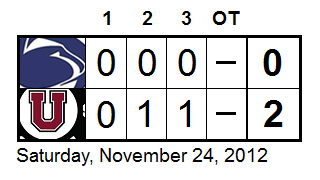 Considering the circumstances, Penn State (6-4-0, 5-3-0 NCAA DI) may have played its best game of the season Saturday night in what was effectively a 1-0 game against Union (7-2-1, 3-1-0 ECAC). The Dutchmen, of course, are presently ranked eighth in the country and played in the Frozen Four last year after winning the ECAC regular season and tournament championships.

And they escaped - yes, escaped - at home against first-year NCAA Division I team PSU.

It does need to be said that Union dominated most statistical categories including shots (42-22) and faceoffs (35-21). Still, Matt Skoff built on his performance against Air Force on November 10th played another outstanding game to serve as the equalizer. The freshman from McKees Rocks, PA read plays and spotted the puck superbly all game long, rarely making things look difficult despite intense pressure at times. He was beaten once in 41 shots faced - by Wayne Simpson's wrister off right wing assisted by Kyle Bodie and Ryan Forgaard midway through the game - but gave no indication that he's about to give up the starting job apparently earned against Air Force any time soon.


The Nittany Lions very nearly tied things up in short order after Simpson's goal. From the Union recap:


[Dutchmen goalie Colin] Stevens made perhaps his best save of the night later in the period, stopping Penn State's Nate Jensen with a glove save on the goal line, as Jensen tried to stuff in a rebound off a shot from Michael McDonagh at 4:13. The play was reviewed by referees Kyle Allen and Peter Feola on video, and the call was upheld.

To underscore how close of a call it was, the radio teams from both Union and Penn State stated during the review process that they thought the puck had crossed the line.

A few minutes into the third period, a funny thing happened. PSU, which had been on the back foot for most of the first 47 minutes, suddenly became the more assertive team, and actually outshot Union 10-7 over the last 12:30 of a one-goal game. David Glen had three of the ten as the Lions pushed for overtime, but with Skoff on the bench late, Cole Ikkala sealed the result with an empty netter off a 2-on-1 with Max Novak.

In addition to Skoff, Glen and Jensen and in my opinion, the defense pair of Luke Juha and Peter Sweetland excelled, as did Taylor Holstrom, who seemed to be in the middle of most of what PSU had to offer offensively. Casey Bailey and Kenny Brooks were great on both ends. Bailey likely saved a goal with a blocked shot at the post on the follow-up to a wraparound attempt on one of the few occasions Skoff wasn't in position.

Stevens finished with 22 saves to pick up his second shutout of the season. Neither team converted on the power play, with Penn State going 0-for-2 and Union ending 0-for-4.

Arguably the biggest concern for Penn State is the status of defenseman Joseph Lordo, who was hobbled late in the game. With Mark Yanis already out thanks to a fractured ankle, PSU only had seven available defensemen going into the tilt. We'll know Lordo's status (at least to some extent) relatively quickly, as PSU will take another shot at the Dutchmen Sunday afternoon at 4:00 p.m.