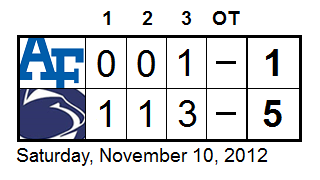 Then again, maybe it's not so stunning coming from a team that continues to exceed expectations on a weekly basis. After all, none of Penn State's six wins can accurately be called "fluky."

The Nittany Lions, especially for a first-year NCAA program, have tremendous balance - PSU received goals from five different players for the third time this season on Saturday night, and after the game Guy Gadowsky praised the play of all six of his defensemen. Penn State also has a big-game penalty kill - against Air Force, just as in the October 20th RIT game (which has probably now been unseated as the team's signature win), the opponent was blanked on the advantage. In short, PSU is competing and frequently winning games just like <gasp> a good team. And then there's the goaltending, which is pretty important in a sport that Falcons coach Frank Serratore says could be called "goalie" instead of "hockey" a lot of the time. Skoff demonstrated a subtle brilliance against the Falcons that comes from superbly reading plays and seeing the puck.

Goals, of course, matter too, and Casey Bailey scored the game's first late in the opening period when the Alaskan sniper squeezed a shot through Jason Torf from the left wing circle. Gardiner, who laid it over for Bailey, collected his first assist on the play. The Minnesota transfer's second came when Juha blasted home his first career goal through traffic for a 2-0 PSU lead after scooping up Bailey's blocked shot.

The single most important shift of the game may have been cashed in by David Glen, Curtis Loik, Kenny Brooks, Connor Varley and Brian Dolan halfway through the third period. The Nittany Lions carried what felt - based largely on Skoff's play - like a comfortable 2-0 lead entering the frame, but Casey Kleisinger cut the lead in half just 2:41 in. For several minutes following the goal, it's probably fair to say that the Falcons had PSU on the ropes a little bit. On stepped the Glen line and suddenly, the action transported entirely to the corners behind Torf's net. Momentum flipped. That group did more than dictate the flow of the game though, as their stint on the ice ended when Loik found Varley up high. Glen then cruised to the slot just in time to deflect Varley's wrister past Torf. 3-1 Penn State.

Air Force wasn't done, of course, and continued to press through one last power play from a Justin Kirchhevel penalty with 4:49 left, and then as they pulled Torf just before Kirchhevel exited the box. Mike McDonagh and Varley responded by bombing the empty net from range to seal the win.