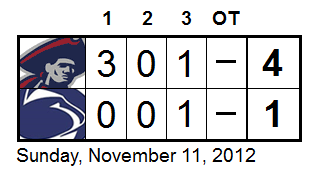 Following Penn State's loss to Robert Morris Sunday afternoon, Josh Brandwene claimed that the third period of the game would be a season turning point. Nobody who witnessed it would question that assessment - despite the game's outcome, it was probably the best stretch of hockey Brandwene's young team has played this season when considering the opponent and the play in all three zones.

Forty game minutes before he reached that conclusion though, there wasn't a whole lot to separate Sunday's first period from Saturday's opener. In spite of Dayna Newsom's early shorthanded goal, the Nittany Lions (4-7-1, 0-5-1 CHA) played an outstanding first 10 minutes of the game before the Colonials (5-2-1, 2-0-0 CHA) deployed their talented forward group. Rebecca Vint and Cobina Delaney, two of that group, scored 4:10 apart late in the period to boost the score to 3-0. Vint's sixth goal of the weekend came off the backhand as she sliced across the middle from the right-wing boards, while Delaney found space in the slot and received a nice setup pass from Jamie Joslin up high.

The game veered off of Saturday's course beginning with the second period. Despite a huge territorial and shooting (19 shots to 2 in the period) advantage for the Colonials, Nicole Paniccia stood tall and kept the high-powered visitors off the board.

Penn State started to find cracks in the RMU defense with about 13 minutes remaining in the game, when Emily Laurenzi stole the puck from Thea Imbrogno at the line during a Colonials power play and got in behind everyone, but RMU goalie Delayne Brian (19 saves) was up to the challenge. Micayla Catanzariti finally got PSU on the board about six minutes later, following up on shots by Birdie Shaw and Jill Holdcroft, who started the sequence with a neutral zone interception. Immediately following the goal, the Lions got another chance, but Brian made arguably her biggest save of the game on Taylor Gross' rebound attempt.

Robert Morris coach Paul Colontino used his timeout following the close call. That temporarily settled things down, but PSU had one more thrust left when a late Jennifer Kindret interference penalty and swapping Paniccia for an attacker gave the Nittany Lions a 6-on-4 situation. However, Joslin halted the drama by tossing in an empty netter from near center.

Still, it can't be denied that for roughly half of the game (the first 10 minutes and the last 20), Penn State was on even terms with the defending CHA tournament champs. That alone is a massive step for the young program, which seeks its first conference win next weekend at second-year NCAA program Lindenwood. Sixty minutes like that last 20 will probably get the job done.